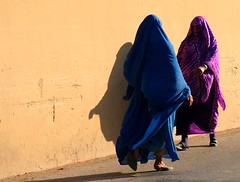 Thousands of Iranian women have been cautioned and arrested over their Islamic dress in the capital Tehran this week, according to a report by the BBC.

This crackdown on poor dress, known as “bad hijab,” is the worst encountered by the city in over a decade, and has been a point of controversy throughout the country, angering men and women alike. However, in spite of this discontent, Iranian TV claims that 86% of people were in favour of this crackdown following the results of an opinion poll, which seems misleading considering the strength of feeling against the move.

Police cars are positioned outside shopping centres, warning women that they must conceal their hair whilst driving, with any woman who protests against this being arrested immediately and her car impounded. It’s not just the young and fashionable who are being targeted, but all women, with even the small amendments that have been made to the strict, oppressive laws being overlooked during this unacceptable tirade and expression of power.

The right to wear a colourful head-scarf, something Iranian women fought hard for, has been snatched away, and is symbolic of the continued belief that Islamic women are still regarded as second-class citizens by a burgeoning, power-hungry, patriarchy. The law is proposing the removal of anything that would make a woman’s dress personal, and distinct, herding women around the country like non-identifiable cattle, used for breeding and nothing else.

The Iranian police enforce these laws every summer, but this year they have been particularly vehement. What’s more significant is that although the authorities are encouraging internal coverage in a bid to scare women into adhering to these imposed rules, they are considerably less amenable to filming by foreign broadcasters. A cameraman working for the BBC was detained when he attempted to film the police at work, and the Iranian government denied the reporters their request to shadow the police on patrol. But what does this mean? Does this mean the Iranian government recognises that its treatment of women is inhumane and oppressive, an attitude that would be considered unacceptable by the western world? Is it that they would resent the prospect of foreign commentary about what they are doing, since it could encourage Iranian women to fight back further against the government that conspires to keep them down? It’s more than likely.

“Really we don’t have any security,” remarked one young women who was questioned, and she went on to give an insight into the disruption to her daily life:

“Since we came out this morning many people we met have continuously warned us to be careful about our headscarves and to wear them further forward because they are arresting women who are dressed like this.”

Shop owners have been subject to instruction by police, some being told that they must not sell tight or revealing clothing, and others instructed to remove the breasts from female mannequins, as they are considered too revealing, but what exactly is offensive about the female body? And why does it need to be concealed in such a way?

So, not only does this have the potential to affect commerce, but is also infringing on the quality of life of women, since many are afraid to venture from their homes for fear of being harassed and accosted by the police, all in the name of the law, of course. Men are also the target of this ‘crackdown,’ with many reprimanded for short-sleeves and shorts, with the Iranian government creating a police state, alienating all those who had become accustomed to the slight lapses in the law governing dress.

Torfiq, a 15-year-old boy, remarked of these restrictions:

“I want the whole world to know that they oppress us all and all we can do is put up with it.”

It’s tragic that the lack of hope for change has permeated the consciousness of the younger generations, and demonstrates the influence police oppression has on the internal machinations of a society over which is has governing control. There has been speculation that the government is being particularly harsh this year in order to distract attention from the increasing cost of living in the capital, and the rising tension with regards to the nuclear issue. One MP went so far as to remark that those who disliked the work of the police should live somewhere else, which would be nothing more than a superficial solution to a problem that has its roots in years of oppression. If what has been suggested is true, the government should consider using tactics not so similar to that of the playground bully to try and solve the problem of rising living costs, rather than unfairly isolating those vulnerable to changes in the law, and having, what all appearances suggest, the political equivalent of a toddler-tantrum.

Photo by See Wah, shared under a Creative Commons License