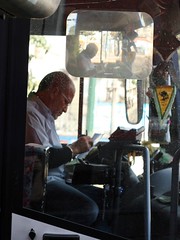 In Israel, women are segregated from men on 30 public bus routes, reports the BBC. The service has been requested by segments of Israel’s population of Orthodox Jews.

Although the article doesn’t mention it, a woman was recently beaten up on one of these “modesty” buses, for sitting in the men’s section at the front.

But the story does provide some interesting insights. For example, one defender of segregated buses, Shlomo Rosenstein, an elected city councilor, said this:

“This really is about positive discrimination, in women’s favour. Our religion says there should be no public contact between men and women, this modesty barrier must not be broken.”

But, even if this wasn’t ridiculous logic – akin to saying women were privileged not to have to work, or bother our little heads about complicated little things like voting – it’s just not true. This is the reality of “positive discrimination” as experienced by the reporter:

Husbands left heavily pregnant wives or spouses struggling with prams and pushchairs to fend for themselves as they and all other male passengers got on at the front of the bus.

Women moved towards the rear door to get on at the back.

When on the bus, I tried to buck the system, moving my way towards the driver but was pushed back towards the other women.

Because “no contact” between men and women obviously means men are allowed to “push” women who don’t do what they’re told.

Interestingly, but not unsurprisingly, women within the Orthodox community are fighting back, and have launched a law suit against the bus companies that run segregated services. Keep your eyes open for more on this subject, as I’m working on a feature about the feminist movement in Israel’s Orthodox community right now, which should appear this summer.

Photo by ariel_bh, shared under a Creative Commons license