John Lewis to use average-sized models 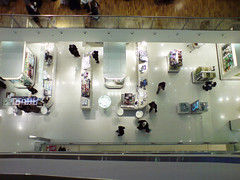 John Lewis is to use a more diverse range of models and mannequins, in an attempt to counter the ‘size-zero’ culture, The Observer.

John Lewis is now going much further by pledging to use a diversity of women in all its advertising in a deliberate attempt to convey a ‘realistic’ image of what British women really look like. While the average British woman is a size 16, most models are a size 8, 10 or even 6. It hopes other big-name stores will follow suit in a bid to fend off mounting criticism that images of routinely ultra-slim models add to the incidence of anorexia, the potentially fatal eating disorder that affects thousands of girls and young women.

Interestingly, John Lewis seems to have been somewhat inspired by Dove and its controversial ‘campaign for real beauty’.

John Lewis spokesman Mark Forsyth said last night that although the chain would not necessarily stop using size 8 models, it would include more variety. ‘What Dove [the skincare manufacturer] has done, promoting the very diverse aspects of women, different shapes and sizes, is very positive,’ he said. ‘It’s about health and promoting diversity. We are hoping that this will stimulate a debate about the use of fashion imagery.’

Of course, it would be much more effective if Top Shop or H&M started using more realistic models, but it’s still a good sign. Especially given last month’s news that the average British woman thinks about her body shape once every 12 minutes.

Photo by SlipStreamJC, shared under a Creative Commons license