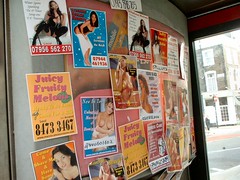 Suited men in Washington are waiting with bated breath for the outcome of the pending trial of the so-called ‘DC Madam,’ according to a report by the Turkish Press.

Deborah Jean Palfrey stands accused of operating a prostitution service in Washington for 13 years until her retirement in 2006. Claiming to having had a clientele of thousands of men, the US capital is allegedly anticipating the exposure of powerful men who availed themselves of this call-girl service, with a senior state department official poised as the first ready fall.

Palfrey denies the allegations claiming that her company, Pamela Martin and Associates, was nothing more than a:

So, essentially, Palfrey’s firm was an escort agency, probably providing all the services we have come to expect from their clandestine operations, whether or not the higher management are willing to admit that essentially they are ‘pimping out’ women. With these women allegedly charging $275 an hour for a 90 minute session, Palfrey’s organisation catered for a high-earning clientele of professional men, something she is not afraid to expose if necessary. She has already made it known that she has kept records of the phone numbers of thousands of men who used her service, which would embarrass a number of US high-fliers should it be made public.

This has already had a knock-on affect in Washington, with the recent announcement that Randall Tobias (the head of the US Agency for International Development (USAID)), will be resigning for a number of undisclosed personal reasons. However, ABC News claims that Tobias is standing down having been contacted about the Palfrey case, since he apparently contacted her number. His links to a firm prostituting women means that he can no longer legitimately hold a position as a respected member of the community, since exploiting women for sexual gratification is hardly a quality conducive to encouraging international development, is it?

Concerns have been multiplying rapidly owing to Palfrey’s first naming of a client on her website, where she has posted a court document from April 12 in which she claims that Harlan Ullman, a US Naval Commander, had used her services. So male professionals occupying the higher, most influential, echelons of society are exploiting women for personal sexual gratification? So, what’s new? Men with money often think they have the right to purchase what they want, be that designer clothing, expensive houses, fast cars, and young, nubile women. For many years, one unspoken facet of the life of the male city professional, has been the speculation about his involvement in a clandestine world of sexual debauchery and exploitation, and as long as money is considered the true indicator of one’s success it will unfortunately continue to happen. They work hard and the play hard, although the exposure threatened by Palfrey will show that the morality many professionals claim to possess is nothing more than personal propaganda.

What’s significant about this story, as it was with the Ipswich murders, is the reference to the women involved as prostitutes or call-girls, rather than as women. Does the use of a distinct nomenclature to define the selling of one’s body for sex somehow lessen the significance of female exploitation and use by men? No, it doesn’t, and the media should begin to demonstrate this through their reporting.

Photo by finkangel, shared under a Creative Commons License