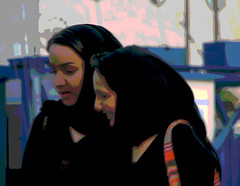 Saudis who hire “runaway maids” will be fined, although many of these women were forced to flee torture, rape, abuse or had their wages withheld, reports Arab News.

Saudi Arabia’s labour ministry has responded to the large number of foreign women fleeing domestic servitude with empathy and concern and is making every effort to prosecute the criminals responsible for treating them this way. Oh, no, sorry, they attempt to stop them getting work anywhere else and disincentivise them from escaping these appalling conditions.

Muhammed Al-Dowaish, a legal consultant at the ministry… said: “The maids will be deported and will not be allowed to come back to the Kingdom.”

“Employment offered by some recruitment offices and Saudi families will encourage maids to run away from their legal sponsors.”

Let’s just remind ourselves of the problem again:

An Indonesian Embassy source said they received about 10 complaints from maids every day. Most of them involve abuse and include severe beatings, suicide, kidnapping, rape, withholding of salary for months and years, sexual harassment and impregnation. “Unfortunately, people here are very cruel to maids. They treat them with suspicion and abuse them in many ways,” he said. The rate of domestic servants fleeing their sponsors in the Kingdom is as high as 70 percent, one report said. When they flee, to find jobs with higher salaries, their sponsors lose large amounts of money which were spent in recruiting them and paying for their visas. People who hire maids illegally say that the recruiting system is too complicated and has too much unnecessary red tape.

(via Sand gets in my eyes)

While this seems, and indeed is, very horrific, it’s actually not that far removed from how women trafficked into domestic and sexual slavery are treated in this country, where they face the threat of deportation if discovered, and resources dedicated to helping them are thinly stretched.

Photo by Kelly Hart, shared under a Creative Commons license