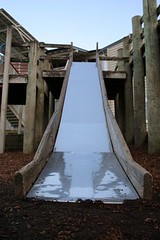 In a bid to tackle the obesity epidemic, girls of primary school-age should be forced to wear trainers and trousers to encourage them to get involved in active play during breaks, according to a new study.

As The Guardian reports it, the study, although primarily focused on getting girls to be more active, uncovered interesting findings about gender in the playground:

Research into the way girls play at school has shown that impractical clothing including shoes that slip off can prevent them taking part in energetic games involving running and jumping.

But the study, by Carrie Paechter at Goldsmiths, University of London, also found that a typical playground dynamic involves football games played almost exclusively by boys taking over most of the space leaving girls as static observers.

And it goes on: girls who do participate in active play are labelled as tomboys, rejected by girls but not accepted by boys.

Professor Paechter’s research, funded by the government through the Economic and Social Research Council, followed two groups of nine to 11-year-old girls as they moved into year six, their final year at primary school. One school was in central London, with restricted playground space, while the other was in a leafy suburb on the outskirts of the capital with extensive playing fields.

The pattern was the same in both locations, the report finds. “In year five, most of the girls are still running around. But by the time they get into year six they have stopped moving and stand around and chat.”

The study found that girls judged each other according to how active they were, and those who opted to join in boys’ football games were seen as less feminine. “For some girls, physical immobility was seen to be an important marker of femininity, severely restricting their activity as they sought to establish themselves as mature and desirable,” the report says.

Some schools have banned football on specific days of the week, substituting it with “gender neutral” sports, and, less-wonderfully, both schools in the study have started “girl-only” sports like netball.

But the idea is that by mandating trainers and practical clothing, schools could further encourage girls to get moving.

Now, this study has mixed the two issues of obesity and gender roles up somewhat, but it seems to me this would be a good first step to challenge this playground dynamic.

Photo by muzzl3, shared under a Creative Commons license