US supreme court shifts towards anti-abortion 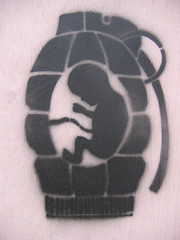 The US supreme court yesterday maintained a nation-wide ban on a procedure known as “partial-birth abortion” by pro-life activists, indicating the appropriation of a more conservative attitude towards abortion in the States, according to a report in The Guardian.

This was the first time the court had intervened in decisions regarding how abortions should be carried out, rather than just ruling over abortion itself. The court ruled by five votes to four that the law passed in 2003 by a Republican-controlled congress, banning the type of termination anti-abortionists regard as tantamount to infanticide, should stand.

The procedure under investigation involves a foetus being partially removed from a woman’s uterus, with a doctor cutting into, or crushing, its skull whilst it is still in the woman’s body. They are only permitted owing to medical reasons for women who are more than 12 weeks pregnant.

The court heard a similar case in 2000, although the court ruled (again by five votes to four) in the opposite favour, believing that banning partial-birth abortions would impinge upon women’s human rights. What appears to have precipitated this change in attitude was the retirement last year of Sandra Day O’Connor from the nine-member panel, and her replacement by George Bush’s favourite, the more conservative Samuel Alito.

This decision has been interpreted by pro-life activists and pro-choice supporters alike as a significant indicator in the changing attitude towards abortion, and it is an approach that is likely to reverberate throughout the world.

The supreme court rejected this course of action, dismissing the suggestion that it violated a woman’s right to choice since more acceptable forms of terminating a pregnancy are available. But is this ruling, and exercise in jurisdication over female reproduction, portentous of more stringent regulations likely to be introduced in the future? Is this just the start of all procedures resulting in terminations being regarded as inhumane, and therefore denied a pregnant woman irrespective of personal circumstances or the health of the developing foetus?

Ruth Badger Ginsburg, associate justice of the court, aired the minority opinion by the dissenters of this judgement, claiming that this decision was concerning since it:

“tolerates, indeed applauds, federal intervention to ban a nationwide procedure found necessary and proper in certain cases by the American College of Obstetricians and Gynaecologists.”

And she continues that the court’s defence of the ban:

“cannot be understood as anything other than an effort to chip away at a right declared again and again by this court, and with increasing comprehension of its centrality to women’s lives.”

So, where does this leave us? Increasing controversy surrounding abortion means that what must already be a hugely difficult step for a woman to take is becoming stigmatised further. If we decide to have a termination for health reasons, or owing to personal and financial circumstances, does that mean that we will be permanently demonised as heartless ‘baby-killers,’ inhumane and fundamentally morally deficit women? If right-wing anti-abortionist have their way it seems that we probably will be, and so yet again we will have to wait with bated breath to see what the next course of action by the political fat cats will be, and then determine how this will impinge upon our freedom of choice. As always the decisions made by those with impressive titles will constitute a redefinition of what it means to be a ‘good woman’ irrespective of context, the terms of which will be dictated to us by those who more than likely have never been in a position to understand.

Photo by asboluv, shared under a Creative Commons License