Women in the military 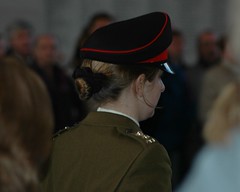 The RAF is the least sexist of the armed forces, according to an article about women in the military in today’s Independent

The feature is full of other interesting bits of information. For example, did you know that Nestle makes a non-misogynist version of its Yorkie Bars because its slogan, “Not for girls”, offends even the army’s sensibilities?

While women have yet to occupy the top three ranks in Britain, there are two army brigadiers and one naval commodore. Women make up 11.2 per cent of officers – a 20 per cent increase since 2001.

There’s still a ways to go, then, before full equality. But the Iraq war is erasing the barriers further. Because there is no “front line”, the rules against women fighting on it are rendered meaningless.

While the RAF has proved itself the least sexist of the services, with 96 per cent of roles open to women, the Navy and Army still ban females from about 30 per cent of jobs. Yet each day pilots, medics, engineers and signals staff serve in an eternally fluid frontline in Iraq and Afghanistan.

In some cases the anomaly is even greater. Gunner Alicia Hussain, 18, was in Basra last year when her Royal Artillery regiment was performing an infantry role, patrolling the streets of Iraq’s southern city.

“We get paid the same, we should do the same job. Why can’t people accept that the British military has moved on in the last 20 years?” she said bluntly.

The Independent also includes a historical role call of women in the military, from Boudicca to Michelle Norris – the first women to get the Military Cross for bravery, at the age of 18.

What the story does not address, however, is rape in the military. On 18 March, the New York Times published an in-depth expose about rape in the US military. Although some of the facts are now in dispute, it did seem to identify a serious problem: both of a culture which allows rape, and the total failure of the military to properly deal with cases of rape. Is the same sort of thing going on in the UK armed forces? I would take a shot in the dark and say: probably. It’s a shame The Independent didn’t even mention this.

Photo by storem, shared under a Creative Commons license