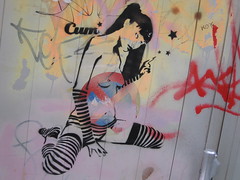 As I carelessly breezed through cyber space this afternoon I happened across a gem of a story, which made me gag on my drink and orange juice come out of my nose. (A fact that will become more unpleasant as this story unfolds.) It seems those science boffins have been at it again, but what have the cheeky young scamps discovered this time? The cure for cancer? Ermmm…No. The cure for AIDS? Guess again. An explanation for why, no matter what precautions we take, we are left with only one sock out of a pair following a spin cycle? No, not even that.

So, what is it then? Well, according to a report by Psychology Today, research carried out in the states has concluded that semen, yes semen, can actually counter the symptoms of, and prevent, depression. The investigation found that women who used condoms were on average considerably less happy than those who omitted to rubber-up. In addition, it was discovered that those women who routinely had sex au naturelle were more likely to become increasingly depressed if extensive time elapsed between sexual encounters. It seems we can’t get enough of the white stuff. (Although forget all those milk adverts, strong teeth and bones does not semen make, regardless of what he tells you.)

The study was conducted by Gordon G. Gallup Ph.D, a psychologist at the State University of New York in Albany, and was based on a survey of 293 college women (which considering the importance stored on the findings, is not actually that many). The research determined that women who went bare back were more likely to become depressed following the breakdown of a relationship or sustained sexual liaisons, and also seek new sexual partners as soon as possible to, what can be interpreted as, help satisfy her insatiable appetite for come. (Nice, though personally I’d settle for a can of coke and a flaky pasty.)

“These women [thos who opted not to use condoms] are more vulnerable to a rebound effect, which suggests that there is a chemical dependency.”

Semen contains hormones including testosterone, oestrogen, prolactin, luteinizing hormone and prostaglandins, some of which allegedly elevate mood, as they are absorbed through the walls of the vagina during intercourse. So, apparently semen contains mood-altering chemicals that can have a significant influence on the way we behave, eh? Fascinating stuff, but I can’t help but question the legitimacy of these claims, and the methodology used by Gallup to conduct his research.

According to Psychology Today:

“Gallup controlled for variables including method of contraception, frequency of sexual intercourse, as well as the women’s perception of their relationship. He concedes that women who regularly have sex without condoms might share personality traits that make them less susceptible to depression. But the behavior most often associated with non-condom users is sexual risk-taking, and studies have found no correlation between high-risk sexual behavior and lower rates of depression.”

Oh, so Gallup did take into account external, social factors, although obviously not to much affect. Is it not a widely understood scientific fact that during any form of aerobic exercise, the body releases endorphins, the feel-good hormone? Of course, when you are no longer producing this, you miss the feeling. How many times have you joined the gym, got that rush and kept going back? It’s all about the adrenalin, baby. But that said, I’ve felt the burn, that flush of energetic euphoria, and then stopped for extended periods of time. (Despite a growing emotinal attachment to the treadmill). Regardless of the longing I’ve experienced for that feeling, I’ve got over it, and I am sure, as unbelievable as it may seem Dr Gallup, being denied the pleasure of a man’s sexual spending is pretty much the same, thanks.

I think Gallup underestimates the importance the similarities in personality traits would have here, when linking to the question of depression, and also the individual’s perception of the relationship. A woman who has a number of one night stands, using condoms, is likely to feel unfulfilled and depressed afterwards if she feels she has been used or treated unfairly. That’s not to say there is anything wrong with one-night stands, or that they always precipitate a feeling of unhappiness. But rather that some women may feel this way afterwards, which is why they do not feel emotionally or physically fulfilled, and so are not that dismayed if they go through a sexual dry spell.

Women who have sex without a condom are more than likely to be in a relationship, where the physical act consolidates the emotional attachment they have to their partner. Of course, following a break-up they are more likely to become withdrawn, depressed and yearn for another relationship similar to that they have left. This is natural, owing to the feelings she would have invested in the relationship, and her desire to experience a connection beyond the purely physical with someone else to replicate that which she has lost. A woman who has a series of one night stands is more than likely focussing on the physical with no feeling attached, and therefore are not affected in the same way.

So, maybe we’re not addicted to the contents of our partner’s ball sacks? It’s something to think about, but personally I cannot help but feel that all Gallup has done is nothing more than provide teenage boys and men alike with a legitimate excuse to encourage their female partners to take their load and be thankful for it. If this gets out, you can imagine university halls, clubs and pubs alike reverberating with the sound of John saying to Suzie, “Come on baby, let’s go bare back, thinking of you I am, you’ll be soooo happy, honey.” At which point it’s probably worth mentioning John has said this to the last 5 women he’s met, with the contents of his underpants nothing more than a festering cornucopia of STDs and bacteria, making the prospect of French-kissing a cats arse seem like a more hygienic prospect. Although, as least should Suzie get up the duff or become in thrall to a suspicious looking rash around her naughty bits, she would at least have a smile on her face whilst huffing and puffing, legs akimbo, on a hospital gurney. Oh yes, it’s a good time to be alive. (or maybe not.). And don’t forget to rubber up.

Photo by derekb, shared under a Creative Commons License