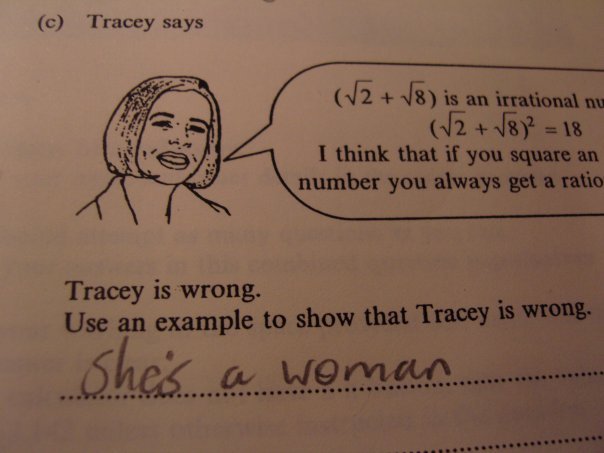 The above image was found on Reddit, courtesy of bemmu, and although mildly amusing, there is a serious message here boys and girls (and yes, you can stop sniggering in the back).

Firstly, although it highlights the ignorance still evident in our society, mainly emanating from the male domain that regards women as intellectually inferior to their masculine counterparts, (which in itself is humorous owing to the fact it is so unsubstantiated), it also demonstrates a bias that continues to be present in education.

From a young age we are conditioned to believe that boys are good at maths and girls are good at english. It has no factual foundations, although this translates as meaning men are essentially more practical and logically, whereas women are erratic, creative, with heads full of tea cakes and fluffy kittens. It’s probably no coincidence that Tracey, with her feminine bob and lips that would give Leslie Ash a run for her money, is wrong.

The joker who claims it’s because “she is a woman” has provided us with a nifty piece of visual satire to highlight the stupidity of such redundant, backward, belief systems that would keep women in the kitchen. You can laugh now, if you like.