Climbing the corporate ladder is easier if someone went before 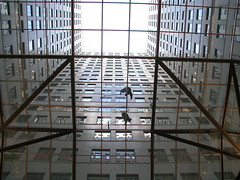 Women do better in their careers if they work for a firm where at least 30% of senior executives are female, The Guardian reports.

The researchers at the London Business School argue that there is merit in introducing targets to ensure the progress of women up the managerial ladder after finding that companies with female chief executives were more likely to enlist women in crucial projects.

“This suggests that executives must take cognition of the fact that when the proportion of women in senior positions is less than critical mass (generally considered to be 30%) then the culture and the practices of the organisation are unlikely to create a strong pipeline for women,” the authors from the LBS centre for women in business said.

It’s obvious, really, isn’t it? Unlike the stereotypes of backstabbing women who open a door in the glass ceiling and then slam it firmly behind them, the truth is that not only are women less likely to practice work-place discrimination, the employers that pass this “tipping point” are likely to be more egalitarian places in general.

The researchers also came up with a number of interesting recommendations, such as:

This is common-sense stuff. Why isn’t it being done?

Photo by eddieq, shared under a Creative Commons license