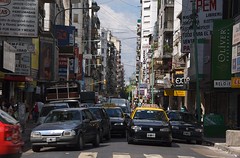 Women in both North and South America have made greater inroads into legislative and management positions than us here in Europe, EUObserver reports.

The figures come from the International Labour Organization (who confound us by using the US spelling of organisation and the UK spelling of labour, but never mind).

Unfortunately, these figures are not broken down country-by-country. The region with the lowest number of women in top jobs is South Asia, at 8.6%. It’s not all bad, though, as the figure has doubled in the last nine years.

World-wide, progress has not been nearly as effective:

Women still represent a distinct minority in such positions throughout the world, though, holding only 28.3 percent of the senior jobs up from 25.5 in 1995.

Overall pay equality is also still poor. The ILO warns that if inequalities continue, the outcome could be dire:

“Significant and persistent inequalities in income, assets and opportunities dilute the effectiveness of any action aimed at combating discrimination. This may lead to political instability and social upheaval, which upset investment and economic growth,” warns the report.

On a similarish-note, a US law-firm staffed entirely by women has been forced to take down a billboard that advertised their services with the line “life is short, get a divorce”, next to a photo of a headless woman in her underwear and a headless man in his underwear. Not because of the photos, understand: because it trivialises divorce. Punkassblog takes this apart:

Normally, advertising featuring a gravity-defying rack like that would satisfy the Patriarchs, but the billboard commits 2 cardinal sins against maledom.

Meanwhile, the New York Times reports that bony clavicles are the new word in sexiness: because they let fashionistas slow that they’re “skinny really” under the tent dresses that are fashionable this spring.