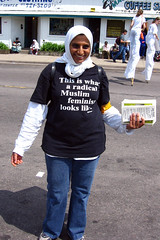 The first ever carnival of radical feminists has been published over at Women’s Space/The Margins.

Cheryl Lindsey Seelhoff goes into a long and detailed explanation of exactly what she thinks radical feminism is, and why we need a carnival dedicated to it. Although I wouldn’t call myself a radical feminist, I’m well aware it gets far too much of a kicking, so it’s nice to be reminded of some of the triumphs of radical feminists – from setting up shelters to laws allowing victims of domestic violence to apply for asylum in the US.

A number of questions remain, however: do we really need another feminist carnival, or will this dilute the impact of the existing one? Have we got time to read another two carnivals a month, assuming this new carnival is as frequent as the existing one? Will it find new ground to cover, or just end up repeating material from main carnival?

I would say – at least on the basis of this first carnival – the answer is, yes, there is a place for a specifically radical carnival. The type of posts it includes are quite different, really – as you’d expect. It focuses much more on theory, and less on current events. But to me the most useful thing is that it helps expand the perception of what radical feminism is to include more than a stance on pornography.

One of the highlights for me was this post, exposing how exam questions set for law students require that they compartmentalize away issues of sexism and racism. One example was “a tax exam that asks students to calculate the tax implications of Kunta Kinte’s master when the slavecatchers cut off his foot”.

Others are more provocative – such as a post in which a blogger argues against sex toys which (heh) certainly rubs me up the wrong way, at least!

Photo by Laggard, shared under a Creative Commons license