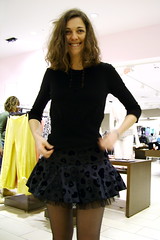 A Polish legislator has proposed a ban on mini-skirts, heavy makeup and see-through or low-cut blouses – in a bid to tackle prostitution, reports Spiegel Online.

Incredibly, Artur Zawisza, a Catholic member of the “Right of the Republic” party (Prawica Rzeczypolpoliteij), thinks the ban won’t impact on women who don’t happen to be prostitutes – because police can tell the difference.

“It is possible that a pretty girl on the way home from a disco might get arrested,” he said, but he trusted Polish police to “tell the difference between respectable women and women with loose morals.”

Uck. This has nothing to do with prostitution – Spiegel reports that prostitution is actually legal in Poland. So, if Zawisza really wanted to do something about you, you’d assume that making buying sex not mini-skirts illegal would be the first move. Not to mention this paleolithic distinction between respectable and “loose” women.

Zawisza has lobbied the Justice Ministry for months to back his proposals, according to Newsweek. In the meantime he and a handful of other conservative Catholics have left the ruling Law and Justice Party to form Right of the Republic. The failure in April of a constitutional amendment that would have restricted abortion further in Poland caused a rift in Law and Justice, and five of its members (including Zawisza) resigned, blaming Prime Minister Jaroslaw Kaczynski for not working hard enough.

Well, at least the Polish government – not otherwise known for its good sense – seems to be ignoring this nutter. But it’s very interesting that Zawisza was one of the ones pushing for even greater restrictions on abortion.

And here’s an interesting historical tidbit:

The last miniskirt ban in Europe dates to 1967, when a Greek military junta under General Pattakos banned both miniskirts and beards.

Photo by koalie, shared under a Creative Commons license