Pregnant? If not, why not? 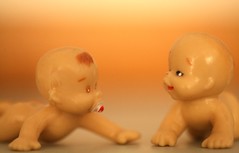 Many consider that men are biologically predisposed to spread their seed as far and wide as they can, the contents of their underpants being emptied as spontaneously and unexpectedly as a summer shower, often catching us out unexpectedly. For women, however, we are expected to fall in love, forge a deep and meaningful relationship, before getting ourselves impregnated, nurturing a growing foetus for nine months, and continuing to do so forever more until that child goes on to squeeze out offspring of its own. If we get knocked up under circumstances other than those prescribed by society, they we’re a slag, a whore, a harlot, destined to wear the scarlet letter forever more, invisible to the eye though it may be.

It’s an argument that surfaces again and again, and a question likely to be met by any woman who’s still a ‘martyr to her monthlies’ until she produces some symbol of her appreciation for her fertility, usually in the form of a screaming shit-machine. Do you have children? If not, why not? This issue has once more been pushed to the forefront of the feminist stage in an article The Guardian today. Sarah Churchwell, in her comment on the pressures placed upon women to make the most of their wombs while they can is worth a read, not least for the debate that has arisen in response to her article online.

Churchwell is a senior lecturer in American literature and culture at the University of East Anglia, and although her article makes for an entertaining read it’s hardly telling us anything we didn’t already know, and in many respects is disappointing. All she has done is regurgitate the same hackneyed arguments and clichéd perspectives that have characterised this debate since women started popping birth-control pills like Smarties, with her claims negatively dominated by her subjective position as a seemingly middle-class woman who has decided not to have children, although it has functioned as a good starting point for discussion.

The responses though perhaps give an insight into the changing attitude towards our choice to abstain from having children, showing a disregard for the traditional social emphasis placed on our need to have children, not to help populate the world, but because as women, that’s what we are, and have always been, expected to do. If we failed to show the slightest inclinations for having a baby clamped to our breast for the foreseeable future, we were considered less than women, traitors, denying our femininity, and anything else casting aspersions on our gender likely to have emanated from a predominantly male thought pattern. The main argument has always been that women are now choosing to pursue careers rather than push chairs, although as one woman claims that she just ‘prefers life with out,’ with the prospect of a hugely gratifying job having no baring on her decision. The responses are encouraging, questioning Churchwell’s motives for writing the article as this is something she is entitled to do, with the general sentiment being why bother us? It’d definitely worth a look, especially since if we no longer have to justify our decisions then there is no problem.

Photo by Thomas Hawk, shared under a Creative Commons License