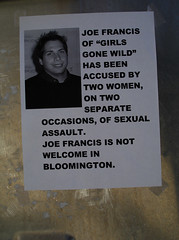 The detritus of 50 years of television is now available on YouTube, as are highlights from many DVDs. Just as Google transforms us all into archivists of previously fleeting moments, so too does the new digital recording technology give youthful acts a permanent life. In the case of Mr. Francis and his empire of imitators–not to mention angry ex-boyfriends with digital flash cards and a long memory–it can transform the playful exhibitionism of young women into scarlet letters that follow them around for life.

Franke-Ruta makes a compelling case. Surely this is a step everyone could agree on as a material improvement to the status quo, whatever your position on pornography more generally.

A new legal age for participating in the making of erotic imagery–that is, for participating in pornography–would most likely operate in the same way, sometimes honored in the breach more than the observance. But a 21-year-old barrier would save a lot of young women from being manipulated into an indelible error, while burdening the world’s next Joe Francis with an aptly limited supply of “talent.” And it would surely have a tonic cultural effect. We are so numb to the coarse imagery around us that we have come to accept not just pornography itself–long since routinized–but its “barely legal” category. “Girls Gone Wild”–like its counterparts on the Web–is treated as a kind of joke. It isn’t. There ought to be a law.