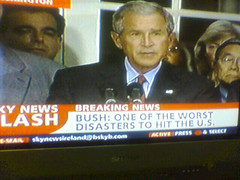 Attacks motivated by gender and sexual orientation could soon be added to US federal legislation on hate crime, after the Senate passed a bill to extend the current law, reports SignOnSanDiego.com.

But don’t hold your breath, because the White House has already threatened to veto the bill.

The White House, in a statement warning of a veto, said state and local criminal laws already cover the new crimes defined under the bill, and there was “no persuasive demonstration of any need to federalize such a potentially large range of violent crime enforcement.”

It also noted that the bill leaves other classes, such as the elderly, the military and police officers, without similar special status.

“Our criminal justice system has been built on the ideal of equal justice for all,” said Rep. Lamar Smith of Texas, top Republican on the Judiciary Committee. “Under this bill justice will no longer be equal, but depend on the race, sex, sexual orientation, disability or status of the victim.”

Because nothing says defending equality like blocking hate crime legislation.

The bill would also make it easier for the Federal authorities to step in if local police fail to act.

Photo by jzawodn, shared under a Creative Commons license