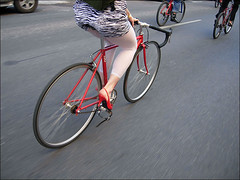 In the finest tradition of investigative journalism, the newspaper sent intrepid reporter Kathryn Knight out into the world dressed like the former Spice Girl, with predictable results.

For a start, just getting dressed is a palaver. There is a common denominator to Victoria’s clothing and it’s best summed up as follows: tight. So much so that it takes quite an expenditure of energy simply to put it on.

As I huff and puff my way into one of her signature pencil skirts over a period of some minutes, I find myself musing whether this is in fact Victoria’s sole exercise regime.

Then there are the shoes. I try on a pair of beige patent Yves Saint Laurent heels, the very same ones Mrs Beckham recently purchased during one of her shopping sprees.

I say ‘try on’ but ‘hoiked into’ is more strictly accurate. Effectively I have to be manoeuvred into them like a crane dropping an enormous boulder into place.

This feature is far from perfect. For a start, Knight fails to expand on the lessons learnt: other than revealing that Beckham must live an exceptionally uncomfortable lifestyle, this experiment could have been a wonderful lesson in the impractical, painful and ultimately undesireable rigmarole the average woman would have to put herself through to emulate one of those “perfect-looking” celebrities.

On top of that, the feature is heavily loaded with snide and nasty comments about Beckham. I doubt they come from a particularly good, or feminist place.

Then we come to the end:

Compare, for example, the self-conscious pose of Victoria’s MTV appearance last week alongside that of Cameron Diaz, who was sporting the same Christian Louboutin heels with an equally short dress but, by means of her relaxed, giggling sexiness, looked a million times cooler.

Which, frankly, is quite confusing. In typical unreformed Daily Mail style, Knight swings from a long explanation of exactly how uncomfortable Beckham’s clothes actually are, to telling her off for not being able to properly hide her discomfort with “relaxed, giggling sexiness”. Because although Knight looks even more uncomfortable (click into the story for photos), for Beckham to reveal that dressing that way is not really sexy is a crime against expectations of feminity.