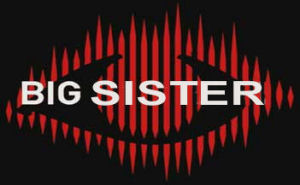 Day one in the Big Sister house – the housemates arrive one at a time. Kate Smurthwaite comes in first, and wanders around the living room and the stainless steel kitchen, looking at herself in the mirror. The doors open – it’s housemate number two, Jessica Valenti. They scream, they hug, they watch the door.

Next in is The F Word’s very own Jess McCabe, swiftly followed by Amanda Marcotte from Pandagon, Natalie Bennett from Philobiblon and Carnival of the Feminists.

The housemates are starting to work it out.

“You’re a feminist too?”

“I thought I recognised you.”

We wonder who will be next. OH MY GOD… it’s Naomi Wolf, this is SO exciting.

McCabe points out that Germaine Greer has been on a reality show before – surely she’s next.

She is! And she’s brought Susan Faludi with her. Big Sister tells them there are two more contestants. Bennett jokes it will be Jeremy Clarkson or the guy who edits NUTS magazine. Marcotte suggests Joe Francis to much general amusement. Smurthwaite’s a bit too over-awed by all the big names to say very much.

Next in is Dr Katherine Rake from the Fawcett Society. One more to go. Surely they wouldn’t put a guy in here. Greer pops open the welcome champagne and everyone watchs the door. It creaks open and a face pops round the end – Ayaan Hirsi Ali.

Day two and the housemates are settling in to their new home. The hottest topic of discussion is Valenti’s new book.

Opinion is very much divided as to whether the semi-naked white woman on the cover is the right image. Valenti says that’s her target market, and that’s the advertising they’re used to. Ali and Greer are of the opinion that feminism should be much more interested in women from the third world and from minority backgrounds, who have so much more ground to make up. Wolf thinks the media is already saturated with images of attractive thin white women and she’s prefer it done with a mosaic of real women. Bennett asks why The Beauty Myth was published with an attractive white women’s image on the front. Faludi says the important thing is to spread the message as widely as possible, she agrees with Valenti’s choice, Smurthwaite’s with her on that too.

Bennett suggests opening a bottle of wine, and Rake and Ali have a crack at cooking.

Rake thinks getting young women interested in feminism is the most important thing but wonders what sort of women such images attract. McCabe and Marcotte wonder whether such a controversial cover will attract extra publicity for the book or reduce it’s impact by making it more difficult for existing feminists to get behind.

Day three and the conversation has turned to feminism and sex. Valenti’s book seems to be saying women should get out there and have lots of sex and find out what they like. Rake and Faludi think that you don’t need to go out and try everything to figure out what you like. Marcotte has a problem with media pressure on women to be sexy all the time. The big divide centres on this question: how do women reclaim their sexuality? Do women refuse to have sex any more or do they get out there and have loads of sex but on their own terms?

McCabe and Smurthwaite are particularly bothered by the sexualisation of very young girls, the Playboy pencil cases and push-up bras for kids. Greer explains, at length, that when she first found feminism she wanted to encourage women to have more sex but as soon as her back was turned men were co-ercing women into things they didn’t want to do, telling them it was liberating. Wolf thinks that the big lie of pornography is that it turns men on to sex. In reality the effect is the exact opposite, she explains, with some pretty convincing numbers to back her up.

Bennett and Smurthwaite are on kitchen duty and have been “tasting” the wine and getting the giggles, but they sober up sharply when Ali starts talking about women’s sexuality under traditional Islamic culture.

Day four and the housemates move on to the subject of what Valenti has missed out from her book. For Smurthwaite it’s religion and it’s impact on women’s lives. Greer is in semi-agreement and favours more discussion of women’s lives in the third world. Ali would put in several chapters on that subject. McCabe and Faludi agree that there needs to be more discussion of the issues around sex and pornography, that FFF risks sending out the “just do it with anyone” message. Rake thinks the history of feminism section could have used a bit more info and takes issue with Valenti’s need to come across as a partial apologist for early mis-judgements by the movement. Wolf points out that the history of feminism doesn’t have to be the history of those that call themselves feminists, but rather those who aspire to the ideals of feminism. Bennett points out that you can’t just claim to be the natural descendant of anyone who ever did anything good. It’s a profound-sounding argument, but McCabe points out that she’s not supposed to be the only one cooking and Wolf heads over to help out.

Marcotte wonders aloud whether the book could handle being any longer without losing its audience, and suggests the housemates nominate what should be taken out of the book. It’s getting late but no-one seems ready to turn in. Several people don’t understand Valenti’s fixation with why women should keep their last name. Surely that’s just your father’s name you’re keeping isn’t it? And hyphenating? If we all did that names would just get longer and longer.

Three AM and the whole last name thing is still going. Several bottles of wine down the line McCabe says maybe we should change our names to words invented by women and we start trying to thing of some. Anything out of Harry Potter will do – Gryffindore? Rake says there are enough people out there who think feminists are witches as it is. Greer thinks maybe we should drop surnames altogether. That’s not so popular with Valenti and McCabe who would end up with the same name, as would myself and Rake. Smurthwaite suggests changing her name to c*nt, given her long affection for the word. It would sure make a statement.

The housemates figure they must be pretty drunk now and decide to call it a day.

There’s no doubt that show could run and run. We all would never run out of things to discuss. And we wouldn’t even really need Valenti’s book to focus our debate. Of course no-one would ever broadcast such a show – and for once not because the media likes to stifle feminist debate (maybe that too though). Because we wouldn’t actually fight! And that’s what makes good television and good viewing and indeed good reviewing: “It’s a great book BUT.”

Well, it is a great book, but it’s not aimed at the residents of my fictional Big Sister household (apologies to those not included or included and misrepresented on any issues by the way, I’m only guessing).

Full Frontal Feminism is aimed at women who don’t know they need feminism yet.

Elsewhere in the universe, Big Brother did kick off with a cast of eleven women and, while of course there is no guessing the hidden depths the individuals selected, on first impressions, the vast majority wouldn’t recognise feminism if it stood up in their soup.

These are the women Full Frontal Feminism is aimed at; this is what they should be reading in the “real” Big Brother house. The question is: will it reach them? I think it will. Not all of them, of course. But I think the cover, the mainstream approach and the very clear focus on what individuals can gain from the movement are all pointing it in the right direction.

And I think Valenti hits the right tone – a view which will be born out by the success or otherwise of the book. I think the book is ideal for younger women. It’s not preachy or patronising but it is practical and encouraging. It’s the a big sister I wish I’d had when I was a teenager.

Kate Smurthwaite is a multi-award-winning stand-up comedian and broadcaster. Her debut solo show Adrenaline received rave reviews at the Brighton, Edinburgh and New York comedy festivals in 2006 and Kate will be appearing in several shows at this year’s Edinburgh festival. She can also be seen on Sky TV’s Where In The World? and is a regular on BBC television and radio, where she is as well-recognised for her outspoken opinions on women’s issues as for her incisive sense of humour.