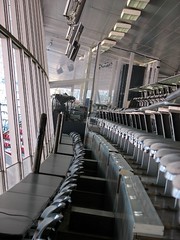 History was made last month, when sports reporter Jacqui Oatley made her debut as the first female commentator to feature on the BBC’s Match of the Day. However, it hasn’t been a celebrated milestone for everyone, as her entrance into the male-dominated commentary box has caused football fans to protest viciously. So, is it right for a woman to commentate on something as traditionally male-dominated as football? Should we leave the boy-zones to the boys?

Saturday night is a sacred time for football fans. I’m not a major fan myself, but having a close male friend who would probably sell me in order for his team to win the premiership means I have to treat the hours of 10:50-11:40 almost as religiously as he does.

It was around this time on April 21 that the boy in question started jumping around like a man possessed, then stormed out of the room and in again, a seemingly pointless trip. I only had half my attention on the television, but being one who is always keen to point out female victory, I did notice that the usual gruff male commentary was replaced by an unfamiliar female tone.

“She’s annoying!” he exclaimed. “Her voice is whiny!” he shouted.

Beforehand, the BBC thought nothing of it: no publicity, no build-up, nothing. Niall Sloane, head of BBC football, said in The Telegraph: “We put her name on our normal rota and, somehow, this reached a tabloid.”

Even though Oatley’s commentary was yet to be shown, many championed the move, or at least treated it neutrally.

But the Daily Mail quoted ex-premiership manager Dave Bassett as saying: “I am totally against it and everybody I know in football is totally against it… when she commentates at the weekend I will not be watching.” Sportsmail football writer, Steve Curry, described Jacqui as “a new arrival whose excited voice sounds like a fire siren”.

She’s clear, concise and makes me feel that pre-shot excitement the same as any other commentator does

It was a few days after that memorable Saturday night when I stumbled across Women commentator on MoTD… Go back to the kitchen – a 4,000 strong online group hosted by the social networking site Facebook.

In comparison, the aforementioned comments by well-known football pundits were almost complimentary. The online group displayed pages of damning remarks made about women, their participation in sport and society in general.

Apart from the occasional, and bearable, joke about women not knowing the offside rule and mickey-taking “they’ll be wanting the vote next” remarks, a large part of the opinions expressed were irrelevant to football and quite blatantly sexist.

One member put: “Hasn’t anyone realised yet that all women ain’t sh*t, only good for cooking, cleaning and sucking dick.” Other not-so-vicious comments included: “women have no place in football”, “they [women] have no right to even talk about football in the vicinity of any male” and “the only woman’s opinion worth listening to is what they think they should cook for dinner”.

Although opinions like these counted for the majority, some members made more mature and understandable comments. Johnny Schouten from Greater Machester said, “We will complain if we feel that a member of personnel on MoTD, or any football programme, isn’t up to the job, regardless of whether they are male of female.” Another member went as far to suggest a more-suitable replacement.

I have re-watched the commentary since on YouTube and have found nothing wrong with it. She’s clear, concise and makes me feel that pre-shot excitement the same as any other commentator does. I am no football obsessive, but I can understand the importance of the commentary.

Therefore, I am stating now, that it is not the complaints about Oatley herself that I am rallying against, but instead I am saying that I do not appreciate people using her presence on Match of the Day as an excuse to be so unacceptably sexist and discriminatory.

Just because there are less women interested in sport doesn’t mean that women should have to work harder to get into the industry, or face sexist criticism

Paula Cocozza, football writer for The Guardian, outlines my point quite well: “Why do the Bassetts and Currys in football permit themselves to say such things? Why, like sensible sexists in other walks of life, don’t they at least have the decency to exercise a little self-censorship rather than give vent to the chill draughts wafting through their heads?”

From the immodest fashion in which Bassett and Curry expressed their opinion, I got the impression that they, and this goes for the football fans on Facebook also, feel that they can make sexist comments in connection with football only because it is such a male-dominated area.

Why is this? Why is sexism so rife and, in some ways, accepted in the world of football and sport in general? And could it be avoided if there were more women involved in the sports production industry? However, if involving more women was the solution, it wouldn’t be an easy one. Recent events concerning Oatley caused me to think back to an essay I wrote recently on the under-representation of women in sports journalism.

The statistics I discovered were predictable; a survey carried out in August 2005 showed out of 160 journalists writing for the sports pages, only fourteen were female.

My research also showed that attitudes haven’t changed. Lynne Truss, a former football columnist for The Times, claimed that older, male journalists took the attitude that “women cannot write about football, simply because they don’t play it”. Truss sarcastically retorted that: “By the same token, of course, theatre critics start each day with a speech from Hamlet, while dance critics squat at the barre.” Bassett made a similar comment in reference to Oatley: “You must have an understanding of the game and the tactics and I think in order to do that you need to have played the game.” Bassett obviously did not know Oatley played amateur football until the age of 27, when she quit due to a knee injury.

Natasha Woods, chief sports writer at the Glasgow Sunday Herald, put the lack of women involved in the sports industry down to “more female journalists [being] interested in the arts, cinema or whatever than sport”. 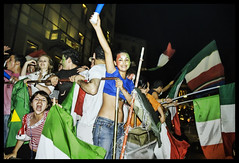 Regardless, Woods does not consider that women, like Jacqui, are finding it incredibly difficult to get into the sports production industry. Just because there are less women interested in sport doesn’t mean that women should have to work harder to get into the industry, or face all sorts of sexist criticism.

Back to the online ranting by football fans. Obviously some people have reacted to the sexist comments made on Facebook. I have joined pro-Jacqui group, Jacqui Oatley is a legend!. But, unfortunately, the group only had 87 members at time of writing: a poor show compared to the thousand-strong membership of the anti-Jacqui groups out there. Some have even summed up the confidence to go head-to-head with the protesters and to join these groups to challenge these sexist attitudes. One female student from Wales condemned the group members for “laying into her because she’s a woman”. She said that “thinking she’s crap because she’s a woman is not cool”. And she added: “I understand your argument and why this has upset you, however, offensive morons… here are ruining the seriousness of your campaign as they are creating an image for you as being ‘sexist pigs’.”

Criticism of the group’s apparent sexist attitude has led Richie Dyer from Lancaster to post that that: “Commentary is an intimately important part of watching televised games and the male desire to keep this male is reflective of many motivations, the primary one I would fathom is the tones, words, and culturally-male vernacular used in communicating.”

Women have been involved in sports production for almost 35 years. Julie Welch filed her first match report for The Observer in 1973

I have no doubt that this may be the reason for a select few’s protests against Jacqui. I completely accept the fact that some may feel she has an annoying voice. And I have been told of past instances when male commentators have been dropped due to bad technique or irritating qualities. However, neither do I doubt that some may be using the “vernacular” as an excuse to be secretly sexist. Basically, I feel that if Oatley’s ‘irritating voice’ was the sole reason for the campaign against her, then quite frankly, no campaign would exist. There would not be football fans complaining in their thousands if it was simply a case of “vernacular”.

I don’t really understand why there is such a big deal being made about it, considering women have been involved in sports production for almost 35 years. Julie Welch filed her first match report for The Observer in 1973, and women have been spotted on the sports news pages ever since. There seems to be no problem with the likes of Helen Chamberlain, Claire Tomlinson and Gabby Logan acting as presenters on football programmes. Logan herself recently stuck up for Jacqui when talking to the Evening Times: “Men were saying things like: ‘This is where we bond and you are ruining it.’ My feeling was: ‘Oh for goodness sake, get over it.'”

Logan went on to say that “attitudes need to change to ensure female sport reporters are taken seriously” and she referred to football as the “last bastion” of sexism and hints that things will change.

In every area of society women have had to fight for equality and fairness. An area of society like football is going to be particularly hard to crack considering how important it is to many men across the country. However, society is constantly evolving and with the presence of women like Jacqui and Gabby, doors are being opened for many other women who want to get into the industry.

Almost a month after Jacqui’s debut, I turned on the television one Sunday night to hear that controversial voice once again. On May 13, Oatley was heard commentating the Liverpool v Charlton game on Match of the Day. The well-respected BBC obviously has no problem with a female commentator. They obviously were unaffected by the stream of objection which followed Jacqui’s debut. Everyone knows not to come between a man and his football, but it’s about time the boys accepted that Saturday nights might be just as sacred to some of us girls too.

Photos shared under a Creative Commons license. Photo of commentator’s box in Barcelona stadium by MUMINUX. Photo of Italian football fans by Stuck in Customs

Katherine is 19 and studying creative writing and journalism at Staffordshire University. She is currently living the high life as a student and will start a feminist-type argument whenever possible.