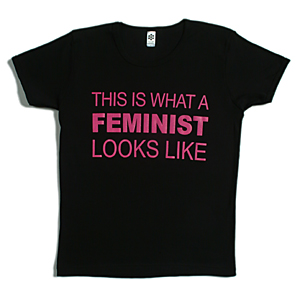 What does a feminist look like? Ask most people that question and, whether or

not they admit to it out loud, they will conjure up a mental image of a fat

ugly lesbian with armpit hair down to her ankles, puce with rage, stoking a

bonfire of supportive undergarments. There is a perpetuating stereotype of

downing pints of their own menstrual blood. Feminists are not considered

normal members of society. Feminism is not associated with mental stability

and it is most certainly not associated with physical attractiveness.

I have no doubt that feminists like this exist, but they must surely be in

and cleaning, and who enjoy nothing more than a bit of gang rape of an

evening. So why do people still think that feminists are dungaree-wearing,

man-hating maniacs with armpit hair you could knit a jumper out of? Why has

this stereotype been perpetuated? Why is it that this is what we think of when we

feminists in the first place, and secondly by legitimising the dismissal of

feminism. It is frighteningly effective on both counts.

Society tells women that their appearance is their most important trait, so the quickest way to silence a woman is to tell her that she is ugly

Few women particularly want to be associated with the hairy-legged,

that few women wish to identify themselves as feminists. Most women – myself

included – enjoy taking a little care over their appearance and certainly

would not want to cast off their brassieres. It maddens me to hear women,

particularly young women, say, “I’m not a feminist, but..” before expressing

what is clearly a feminist viewpoint. They refuse to identify themselves as

feminists because they cannot reconcile their desire for gender equality

with their physical attractiveness and heterosexuality. They believe that

one cannot be a feminist without wearing clumpy boots and no make-up,

growing their body hair to neanderthal proportions and spurning their male

More worryingly, the feminist stereotype is also used as an excuse to

dismiss feminism. The comments of “trent” in response to K* Harknett’s

demonstrate this phenomenon quite nicely.

“you are all lez and fat, also you have never had a man in your pathetic so

called life, feminism is a load of shit i have seen better in my loo, stop

is actually a bloke, his message is clear: the views of an unattractive,

overweight or homosexual woman are not regarded as important. It is

attractiveness and grooming might deserve our attention, or that she should

be respected and listened to rather than abused.

Quite apart from assumptions that have no evidence to support them, why

shouldn’t a “fuckin’ ugly slag” be entitled to comment on gender issues? Why

are the views of an attractive, heterosexual woman considered more worthy?

Why is she listened to when her 300 lb peer is not? It could certainly be

physically attractive, women at extremes of the attractiveness spectrum are

more affected than most by gender issues, so why not give the fat ugly birds

a fair hearing? Why are we so offended by the idea that they might have

something of value to contribute?

Bikini-clad East-European models could pout suggestively at the camera as they aired theories on abortion, glass

ceilings and hardcore pornography, demonstrating the glam side of modern

Even when expressing feminist opinions, a woman’s appearance is of paramount

importance. If she is unattractive, she will be dismissed as bitter towards

men owing to a history of rejection. This supposed bitterness will be used

as to why she should just shut up and crawl back under her rock. If she is

not unattractive however, this will not stop people from telling her

Women are preoccupied with their appearance because society tells

them that their appearance is their most important trait. Because women are

so preoccupied with their appearance, the quickest way to silence a woman is

to tell her that she is ugly. In pointedly telling a feminist that she is

“lez and fat” one hopes either to shut her up by puncturing her self-esteem,

or to generate a furious response, thus allowing her to demonstrate that she

is even fatter and lezzier than one initially stated.

In a culture where a woman’s appearance is her most important trait, an

the masses. She does not deserve to exist. In associating the desire for

gender equality with physical unattractiveness, we remove the issue of

gender equality from public interest. We make feminism an unappealing

prospect for women, and should a woman slip through the net and become a

and at worst to abuse her.

[pulloutbox]We need pictures of diverse people, all proud to call themselves feminists, on billboards everywhere

Sadly, the only short-term solution to this problem would involve lots of

theory that feminists are ugly. Bikini-clad East-European models would have

to pout suggestively at the camera as they aired theories on abortion, glass

ceilings and hardcore pornography, demonstrating the glam side of modern

masturbated furiously over their political totty. Having physically

feminism and getting more young women interested in it, but, of course, to

is about. It is grossly unfair to deny an unattractive woman a platform for

her views, or to value the opinions of an attractive woman to a greater

degree solely based on her appearance. There is little sense in banging on

about the objectification of women whilst objectifying ourselves.

The Fawcett Society’s This is What a Feminist Looks Like campaign has made a valiant attempt to address the marginalisation of feminism, by photographing a diverse range of celebrities and politicians in t-shirts proclaiming their feminist status. Unfortunately, this brilliantly executed campaign has not been sufficiently publicised to make a real difference. In order to see the photographs and quotes from the various people involved, one has to search for it on the internet – not something I can see either the “anti-feminist” post-feminists or the Neanderthal louts who would most benefit from the campaign doing. What the Fawcett Society needs is for an extremely rich feminist to donate enough money for them to buy advertising space. We need those pictures of diverse people, all proud to call themselves feminists, on billboards everywhere.

In the meantime, whilst we’re waiting for our benefactor to step up to the mark, what can we do? We must be proud to be feminists. We must prove that

feminism is relevant to all women, not just hairy lesbians. We must fight to

be respected. We must respect men and yet be unafraid of criticising them.

commented or speculated on. Essentially, there is nothing we can do other than to keep doing

You may be wondering by now where I fall on the attractiveness spectrum. I

could be a fat bird in sensible shoes, or a perfectly waxed Scandinavian

swim-wear model. I refuse to comment because wherever on the spectrum I fall,

it’s completely irrelevant. I have the right to express my viewpoints

I wanted. Everybody should have the right to comment on gender issues, or

for that matter any issue at all.

Samara Ginsberg is neither a fat bird in sensible shoes nor a perfectly waxed Scandinavian swimwear model.