From China to Colombia, by way of Southwark 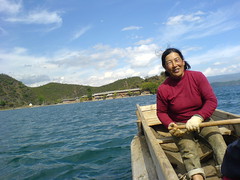 The Mosuo people of China are that rare thing: a matriarchy. I posted about them briefly back in April, but if you’re curious to know more I’d recommend this radio documentary by the BBC World Service.

Not only does it go into far more detail about the lives of the Mosuo, the story is told by a Chinese journalist, and so you get her particular perspective as a Chinese woman, comparing their lives to the society she grew up in.

According to the Feminist Majority Foundation, Colombia is on the verge of passing legislation to give same-sex couples marriage-like rights.

For our male readers, the ones on Facebook anyway, this is to let you know that Jonathan Dean, who has contributed to The F Word in the past, has set up a group for you! Go join here, and of course you can also join our group too.

Meanwhile, I got an email today letting me know that my MP here in Southwark, the president of the Liberal Democrats, Simon Hughes, has signed the Early Day Motion on promoting black and ethnic minority women in public life. Louise blogged about it earlier this month. The number of signatories has increased since then, but is still rather scant. In particular, not a single Tory MP has signed the motion. So get writing those emails to your elected representatives!

Photo by satanyork, shared under a Creative Commons license