Golf is not enough 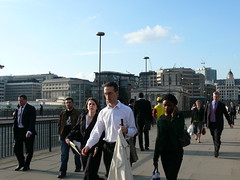 As we blogged earlier, the government has just put forward proposals to shake-up legislation on discrimination.

Although the bill includes some welcome moves forward, for example giving women the right to breast-feed in public, the consensus seems to be that it falls short.

Today, The Guardian reports the CEO of the Disability Rights Commission, Bob Niven, has said the proposal “fails to measure up – either to the remit it was set or the reality of continued inequality and discrimination in Britain today”.

Meanwhile, Trevor Phillips, who chairs the new Commission for Equality and Human Rights, was also far from impressed:

“We will expect to see a final bill which introduces greater simplicity and transparency to equality law; offers more flexibility to employers in balancing their workforce diversity; uses procurement creatively; recognises the central role of public services in guaranteeing greater equality; and most of all shifts the drive for fairness from courtroom battles after things have gone wrong to transforming the cultures of our workplaces and communities,” he said.

The Fawcett Society is more specific in its criticism, noting that the bill fails to introduce any of the measures it recommended to help close the pay gap, such as compulsory equal pay audits, preventing employers from firing women while they are on maternity leave or within six months of their return (let’s face it, can their really be grounds for dismissing someone when they’re not even actually at their desk?), and greater powers for equality watchdogs.

From their press release:

Dr Katherine Rake, director of the Fawcett Society said: “This might be good news for women who play golf, but for the millions more who just want to be paid equally it’s a distraction.

“At the current rate of change, it’s going to take 140 years until women are paid equally – and the Government has missed a huge opportunity to speed that up. This is tinkering at the edges.”