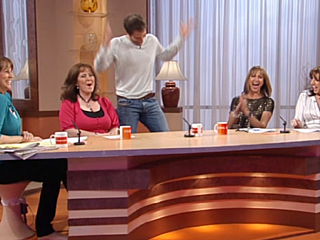 Daytime TV has never been renowned as a hotbed of televisual innovation, but

This programme can only be described as the small-screen equivalent

of a cross between the cheesiest of hen-nights, and a weekly women’s

magazine of questionable quality. For the uninitiated, it’s a frothy,

show-home school of interior design. Its rolling panel of five

hail from the world of soap, light entertainment and made-for-TV drama.

Those involved in making the show probably like to think of it as feisty,

daring and outspoken (hence the feeble play on words in the title), but

unfortunately, it’s just an hour-long cliche-fest. You can almost hear its

(perhaps with a light sprinkling of innuendo), the obligatory multiple

choice phone-in competition, a spot of group fawning with a couple of guests

and then another helping of lame chat. The panel members kick off by taking

mind-numbingly inconsequential, such as ‘how do you deal with cold callers?’

The show perpetuates the idea that women are a bunch of two-dimensional, inherently shallow, gossip-mongers

More often than not, it is lowest-common-denominator guff like, ‘do you

require a man to have a nice bum?’ or ‘which style icon do you most prefer

Kate Moss or Posh?’. The latter item was thought important enough to merit

elections in Scotland and Wales.

Guests always consist of soap stars, pop stars, actors or comedians, all of

whom are shamelessly plugging their latest storyline/album/show. These

ever-so-minor celebrities are asked a small selection of tedious,

back-of-a-fag-packet kind of questions. “So how long did it take to write

your new album?” “Are you anything like your character when you’re

off-screen?” This gives them ample opportunity to flog their latest wares

and demonstrate just how normal and “down to earth” they are. Consequently,

the so-called interviews are dire. Nothing searching, controversial or even

remotely interesting is ever touched upon. It’s this uninspiring combination

of bitty format and insubstantial content that makes Loose Women so

annoying and unsatisfying to watch.

It’s unclear exactly who the programme is aimed at. When the camera pans the

studio audience, it seems to be entirely made up of women between the ages

of about 40 and 60. Yet both the sexagenarian comedy duo Canon and Ball and

the singer Sophie Ellis Bextor were among the star turns recently.

And, although the media would have us believe that 40 is the new 30,

collection of poptastic tunes is going to appeal to those who

appreciate the finer points of British end-of-pier comedy from the 1980s.

Nevertheless, whoever or whatever is presented, the clapping, whooping

audience cheerfully laps it up.

plunge, here’s a some questions that have been posed on the Loose Women

website: do you get jealous when a friend loses weight? Is complaining good?

Do men tell better jokes than women? Is goose the new turkey? Personally

I’d have to answer: no, yes, depends on the man/woman in question and I

don’t really give two shits. Honestly! It’s 2007. Is this really the best

that ITV can do? Are there really no other issues in which its commissioners

wider range of women onto the panel?

Loose Women is heterosexist, Euro-centric and makes overconfident assumptions about women’s homogeneity which are offensive, outdated and dull, dull,

And while we’re on the subject of the panel, it seems as if these particular

women have been chosen because, as well as being gregarious and having

showbiz credentials, they’ve, “been around the block a bit”. And, although

they’re attractive, they aren’t so jaw-droppingly stunning that your average

female viewer could find them threatening – those watching from their sofas

can comfortably relate to them instead. The level of superficiality that the

show’s presenters and contributors exhibit is odd, because they appear to be

savvy, articulate and pretty successful in their chosen fields (they must

have been extremely determined, talented and tenacious to make it in the

notoriously sexist world of show-business in the first place). But the crux

and, when it comes down to it, maybe paying the bills takes precedence over

This overexcited rant is not fuelled by TV snobbery (believe me, I relished

the outlandish campness of Footballers’ Wives every bit as

Review). It’s just that, in addition to its lack of style and substance,

about women’s homogeneity which are offensive, outdated and dull, dull,

dull. On top of all this, the show simultaneously adopts the message that the working class are the salt of

the Earth, while pillorying ‘chavs’. All

the championing of negative gender-stereotypes, and the perpetuating the idea

that women are a bunch of two-dimensional, inherently shallow,

nothing more than to discuss men, sex, kids, shopping and watching telly at

great length). And yes, thousands, if not millions, of women probably do so

film and international affairs too.

Dawn Kofie is 31 and lives in Edinburgh. She very much enjoys baking, pop

music and growing things that she can eat. She has an aversion to peas,