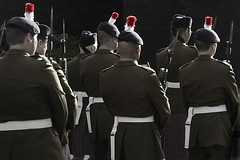 The Ministry of Defence has apologised for the suffering caused by its ban on gay and lesbian folk serving in the armed forced, reports The Guardian.

Wing commander Phil Sagar issued the apology only a few days before London Pride. Since the law was changed in 2000 to stop the armed forces dismissing people on the basis of their sexuality, some have won damages from the government for the damage done to their careers.

“Of course we’re sorry for anyone who’s suffered personal trauma,” he said in comments broadcast today by BBC Radio.

“We can’t change the past and what’s happened has happened. But if, as I’m sure you have, you’ve got testimony from people who feel that their lives have been ruined from this, then clearly that is not a good place to be.”

He also reveals details of what life was like before the ban was lifted:

Speaking on Radio 4’s Cleaning Out The Camp, which reported how special investigation police targeted suspected gay men and women in an official policy to “clean out homosexuals”, Wing Cdr Sagar recalled his own experience of barrack raids as recently as 1985.

“I appeared in the appropriate barrack block to find four provost senior NCOs – and, for some reason best known to them, a dog – cutting the padlock of a young serviceman’s locker, search through all his material, read all his letters, search all his belongings – purely on the suspicion that he was gay.

“Now, at the time I didn’t see anything wrong with that. I stood there as a serviceman doing my duty in accordance with the rules, regulations and culture of the time.”

Photo by andyconniecox, shared under a Creative Commons license