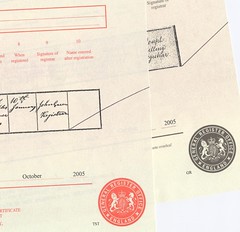 It could soon be compulsory to include the name of a new-born baby’s father on its birth certificate, reports the BBC.

Ministers said they would push forward with the plans once safeguards to protect vulnerable women and children could be put in place.

Which, I would have thought, is a not-insignificant problem. Seeing as the story doesn’t mention what these safeguards are, I’m guessing they haven’t managed to pin them down yet.

The government argues that the move will encourage fathers to get involved in their offspring’s life, and make it easier to chase them up for child support. All to the good. But, as Kate Smurthwaite points out, there are some very solid reasons that mothers may not wish to name their baby’s father on the birth certificate. What might those problems be?

1) There is some kind of problem. They were raped and don’t want the rapist to have rights and access to the child. They were a victim of incest and don’t want the child to have that on their permanent record. The father has threatened them with violence or abuse if they “grass him up”. They fear that an ex-partner or members of the family may attack or even murder the father if he is named.

2) They genuinely don’t know who the father is. They had a one night stand and didn’t get in touch afterwards or left false contact details. Or they may have been having simultaneous relationships with several men and not know which caused the pregnancy.

In either case who are they going to prosecute under the new laws? A new mother, baby under one arm, sat there either terrified or just quite honestly unaware of who the father of her child is? That doesn’t seem very resonable. And how can they prosecute the father? They don’t know who he is!

It’s hard to see how any measures to protect the victims of rape and domestic violence are going to be sufficient. What if the mother hasn’t reported the rape? If she has gone through with the pregnancy, why should she have to talk about it to anyone if she doesn’t want to, let alone jump through bureaucratic hoops?

And there doesn’t seem to be any plan to protect women who don’t know who the father is – from an intrusion into her privacy and from having to explain her lifestyle choice. Not to mention women who have conceived using donated sperm.

Although this plan seems to be coming from a good place, the truth is that it has the potential to be a massive disaster.

Photo by sharps, shared under a Creative Commons license