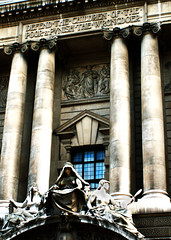 The government is planning a raft of reforms in a bid to drive up the low rate of rape convictions, reports The Guardian.

The reforms sound great: first off, it will become possible to call expert witnesses about how rape victims generally behave, “to dispel ‘myths’ that might affect the jury’s reactions”. Secondly, it will be possible to screen video of rape victims giving evidence to the police, so they won’t have to repeat the ordeal in court. And thirdly, juries will be able to be told if women tell someone else about rape before reporting it to the police.

But ministers have scrapped plans to better-define the law on consent, which could have helped clarify the point at which it becomes impossible for a woman to give consent – for example, if she is paralytic.

Although the government has backed away from this more controversial point, this still looks like a good, solid set of reforms that has the potential to improve the rate of convictions. Although The Guardian reports that judges say “privately” they don’t think it will help, the situation is at such a crisis point at the moment that it’s worth trying.

As well as that, we must ask some serious questions about those judges. Because they are fighting the government every step of the way on these changes. The Guardian says that the Council of Circuit Judges is opposed to all of the main planks of the proposals. Why?

But judges who will have to apply the law remain opposed, warning it could greatly increase costs, double the length of some rape trials, and possibly lead to miscarriages of justice.

How could this lead to a miscarriage of justice? It is honestly beyond me. All the changes would do is potentially save women from the awful experience of re-telling the rape in court, provide extra evidence in cases where women do not go to the police immediately and help to counteract some of the horrendous ideas that the general public evidently has about rape.

But these judges are not concerned with that. They are concerned that rape trials might take longer to get through the courts. And, note, they don’t seem to be coming up with any solutions of their own regarding how to improve the process.

Photo by wit, shared under a Creative Commons license