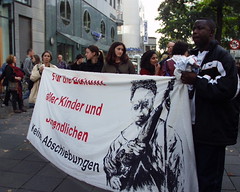 The disproportionate number of young women leaving the former East Germany is driving men into the arms of neo-Nazis, reports Speigel Online, in a thoroughly objectionable feature.

First off, someone at the German newspaper thought it was a good idea to illustrate the story with a photo of Miss Eastern Germany in a bikini. I suppose she is doing her duty of titillating the local men, so she’s a good role model?

Now, the reason for the story is a study by the Berlin Institute for Population and Development, showing that two-thirds of those who have left the region seeking jobs and prosperity in the west are women.

The result is that in many towns in the region, there are simply not enough to go around — some places are missing up to 25 percent of their young women.

Because women are commodities, there to be passed around the young men of the region. And they are also the property of the places they are born – God forbid they might actually want to go and make something of themselves somewhere else.

Even worse, the young men who stay behind are often poorly educated, unemployed and frustrated — perfect fodder for neo-Nazi groups looking for members.

And if it wasn’t bad enough, those uppity women running off to seek their fortunes have driven men into the clutches of the far right, by not fulfilling their duty of servicing them. It’s not like those men have any responsibility for their own noxious political views. (Or, indeed, the government, society and political system that makes this possible. Let’s not blame the economy, or the education system, for example.)

To be honest, if the only thing standing between a great proportion of local men and their vote for a neo-Nazi is a job and, well, a blow job, I’m not surprised these women didn’t want to stick around.

Already, Eastern Germany is missing some 100,000 babies that otherwise would have been born in the region had more young women stayed. The brain drain and the lack of offspring further erode the economy.

Then we get to the solution. If we accept that this is a real problem (which, by the way, I don’t), how to change the tide? Better opportunities for women, perhaps? No.

The study recommends a greater focus on educating the region’s young men, but admits that solving the problem is a difficult challenge.

(Thanks to reader George Mason for the link, via our Facebook group)

Photo by olwan, shared under a Creative Commons license