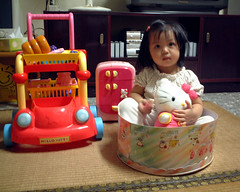 Toddlers begin to recognise and react to gender stereotypes when they are as young as two years-old, reports Salt Lake Tribune.

The study is a “nice demonstration of a developmental phenomenon,” said Chris Porter, a BYU professor of human development who wasn’t involved in the research. He said it shows babies are good observers who can pick up on subtle cues.

“Perhaps there’s more of a social pressure towards socializing these children to sexual norms” than previously thought, he added.

In the past, researchers believed that toddlers only began to respond to gender stereotypes in pre-school, when girls and boys often segregate themselves while they play.

Who can be surprised, really? Not only are babies and toddlers observing expectations of female and male behaviour from the moment they are born, they are gendered themselves – from the clothes they wear to the toys they’re given.

Photo by Spitzgogo_CHEN (Nokia 6230i), shared under a Creative Commons license