What’s it really like for a woman in Saudi Arabia? 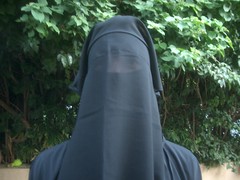 What’s it like to live behind a veil, in a country where women are forced to live like children, where driving is out, Starbucks is segregated and even a government spokesman is afraid of the moral police?

LA Times reporter Megan Stack spent years working in Saudi, and explains the experience in fascinating detail in this article, which I suggest everyone reads in its entirety.

Stack explains that she resents wearing the all-encompassing abaya, but even for a US reporter on assignment, after a while it begins to affect you.

I always delayed until the last minute. When I felt the plane dip low over Riyadh, I’d reach furtively into my computer bag to fish out the black robe and scarf crumpled inside. I’d slip my arms into the sleeves without standing up. If I caught the eyes of any male passengers as my fingers fumbled with the snaps, I’d glare. Was I imagining the smug looks on their faces?

The sleeves, the length of it, always felt foreign, at first. But it never took long to work its alchemy, to plant the insecurity. After a day or two, the notion of appearing without the robe felt shocking. Stripped of the layers of curve-smothering cloth, my ordinary clothes suddenly felt revealing, even garish. To me, the abaya implied that a woman’s body is a distraction and an interruption, a thing that must be hidden from view lest it haul the society into vice and disarray. The simple act of wearing the robe implanted that self-consciousness by osmosis.

Here, Stack explains how Saudi men seem to expect her to be won over by life, literally, undercover:

Saudi men often raised the question of women with me; they seemed to hope that I would tell them, either out of courtesy or conviction, that I endorsed their way of life. Some blamed all manner of Western ills, from gun violence to alcoholism, on women’s liberation. “Do you think you could ever live here?” many of them asked. It sounded absurd every time, and every time I would repeat the obvious: No.

Some of her stories are hilarious. For example, she recounts being forced into the shrubbery by bank security guards, where she “was hidden from the view of the window, thereby protecting the virtue of all those innocent male bankers”.

Of course, Stark was only in Saudi temporarily. For locals, the issue is that much more intense:

One young, hip, U.S.-educated Saudi friend told me that he arranges to meet his female friends in other Arab cities. It’s easier to fly to Damascus or Dubai, he shrugged, than to chill out coeducationally at home.

But, overall, Stark has a message that is important but difficult to handle. Things aren’t that different in the West:

I would find that I still saw scraps of Saudi Arabia everywhere I went. Back home in Cairo, the usual cacophony of whistles and lewd coos on the streets sent me into blind rage. I slammed doors in the faces of deliverymen; cursed at Egyptian soldiers in a language they didn’t speak; kept a resentful mental tally of the Western men, especially fellow reporters, who seemed to condone, even relish, the relegation of women in the Arab world.

In the West, there’s a tendency to treat Saudi Arabia as a remote land, utterly removed from our lives. But it’s not very far from us, nor are we as different as we might like to think. Saudi Arabia is a center of ideas and commerce, an important ally to the United States, the heartland of a major world religion. It is a highly industrialized, ultramodern home to expatriates from all over the world, including Americans who live in lush gated compounds with swimming pools, drink illegal glasses of bathtub gin and speak glowingly of the glorious desert and the famous hospitality of Saudis.

The rules are different here. The same U.S. government that heightened public outrage against the Taliban by decrying the mistreatment of Afghan women prizes the oil-slicked Saudi friendship and even offers wan praise for Saudi elections in which women are banned from voting. All U.S. fast-food franchises operating here, not just Starbucks, make women stand in separate lines. U.S.-owned hotels don’t let women check in without a letter from a company vouching for her ability to pay; women checking into hotels alone have long been regarded as prostitutes.

Reading this, it occurred to me that no fuss is being kicked up about the behaviour of these firms, although they are condoning and enabling human rights violations as surely as Yahoo! did when it passed on the details of a dissident to the Chinese authorities. Where is the outrage about the actions of these companies in Saudi? Where is the feminist boycott of Starbucks, or those un-named hotel chains?

Photos by justin, and WaveCult, shared under a Creative Commons license