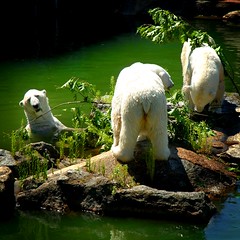 If you’ve walked past a newsagent today, you have no doubt noticed The Independent’s headline: “The Earth today stands in imminent peril”. Of course, the headline refers to the threat of climate change, and specifically a warning by six US scientists:

“Recent greenhouse gas emissions place the Earth perilously close to dramatic climate change that could run out of control, with great dangers for humans and other creatures,” the scientists say. Only intense efforts to curb man-made emissions of carbon dioxide emissions and other greenhouse gases can keep the climate within or near the range of the past one million years, they add.

Headlines like this are no longer surprising. But one side to this story that has received little attention so far, is how women are likely to bear the brunt of climate change.

Environment, Conflict and Co-operation has put out a special issue outlining the ways that gender feeds in to the dangers of climate change, explaining exactly why this is the case. For anyone wondering why climate change is a feminist issue, I recommend giving it a read. It’s actually quite short and digestible, and provides valuable information on things like how the mechanisms being designed to curb climate change may cause conflict, which in turn will affect women more than men.

Photo by OlliK, shared under a Creative Commons license