Women banned from working at night in Kuwait 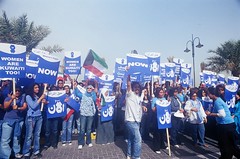 The Kuwaiti parliament has passed a law banning women from working between 8pm and 7am, reports Gulfnews.

The government also banned women from working in jobs that “contravene with public morals and in all-men service places at any time.”

Gulfnews doesn’t expand on what that actually means, though, so we are left to guess, and other online news sources which have covered the story so far do not go into more detail. But, as well as being ridiculous, misogynist bullshit, the whole concept that women doing their job around men could contavene public morals worryingly vague.

It’s also interesting that the parliament past the law only a year after Kuwaiti women won the right to vote – is it part of a backlash? The parliament is obviously not taking much notice of its new constituents, so what will happen at the next election?

The comments are revealing and contradictory. Amir, posting from the US, said:

There are many countries where women work but still are poor as India where millions live below poverty line so industry is not effected by making women work, give them freedom from work and support them fully with what ever they want.

The “women as pets” theory of life. Restricting women’s options will never make them free. And, if women are so well-off and satisfied that they don’t want to work, and this law will not restrict their freedom, then why would Kuwait need to pass it?

Photo by nibaq, shared under a Creative Commons license