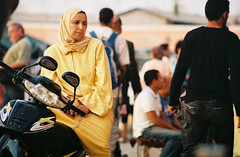 Nadia Yassine is the spokesperson for an illegal opposition group in Morocco. Check out her interview with Speigel Online on an Islamic type of feminism.

I speak for a different culture, the Islamic one. Our religion is very much friendly to women. In theory, in our sacred texts, we have many rights. But the men, these little machos, have robbed us of that. It’s their fault that the whole world believes the opposite.

Although Yassine is at pains to distinguish herself from secular feminists, in practice her demands are pretty similar. On her reasons for opposing the Moroccan king’s reforms including outlawing forced marriage, she explains:

Of course it’s right for women to have more liberties. But what does that look like in practice? How can a woman make use of her right to divorce, for example, if she has no job after her divorce and ends up on the street? In rural areas, there are now far more illegal marriages. There, women have a choice: Either they prostitute themselves, or they marry or they migrate to the large cities. The king has passed a law for women who go to high school, but not for average people in the countryside.

Meanwhile, doctors in the UK are being asked to look out for look out for signs of depression and self-harm among Asian girls and women, and “alert the police” if they suspect they may be at risk of kidnapping, forced marriage or rape. Although doctors may be reluctant to break patient confidentiality, and some may object to the manner of targeting women based on their ethnicity, Sunny at Pickled Politics points out:

Some people will inevitably complain about excessive meddling and “stigmatising” etc but then those people have never really cared for women’s rights. In such cases I would rather be safe than sorry so that the practice is eradicated. We need a comprehensive approach to tackling this social issue.

The BBC reports that “dozens” of type 1 diabetics have written in admitting that they skipped insulin injections in order to lose weight:

Victoria Hunter, 26, from Glasgow abused insulin in her teens.

She told the BBC: “If I knew I had a party coming up at the weekend and wanted to fit in to a lovely outfit I would maybe skip all my evening injections, and lose up to half a stone in a week.”

(Thanks for the link Mike)

On a lighter note, Feministing draws our attention to a story in the New York Times about how much men enjoy dressing up their characters in “male-played” games like Grand Theft Auto. And Hoyden About Town points to a satiric video up on YouTube about the Woomba – a robotic vagina “freshener”.

Plus, The Guardian reports that Catherine Tate will return as Dr Who’s companion next series. While I would ordinarily be pleased by this – after all, it’s the first time in the new season that they’ve gone for a companion that doesn’t fit squarly into those boring beauty standards we know so well – I can’t help it. She will be reprising her role as the “runaway bride” character – a role so annoying, I almost didn’t make it through that episode. I have a feeling we’re going to miss Freema Agyeman as Martha Jones.

Photo by Island Spice, shared under a Creative Commons license