Iran and US unite against women’s rights treaty 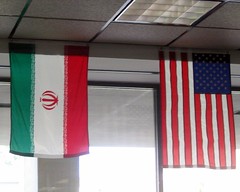 Today the BBC runs a story noting that the only thing the US and Iran seem to agree on is not ratifying an international treaty calling for the elimination of discrimination against women.

So why won’t Iran join the Convention on the Elimination of All Forms of Discrimination Against Women (Cedaw)?

Mehrangiz Kar, an Iranian human rights lawyer based at Harvard, says that the Iranian legal system is inherently incompatible with Cedaw.

“The Iranian government is based upon Islam, and its constitution states that laws cannot contradict the Sharia. Given that the Sharia does not consider men and women’s rights as equal, its joining the Convention would be problematic.”

The Iranian government is rather more coy in explaining away its failure to adopt Cedaw:

Some high-ranking women within the Iranian government also reject treaties like Cedaw, which they see as a “failed Western model.”

Former US prez Jimmy Carter signed the convention, but it has yet to get the stamp of approval from the Senate. Opposition to the treaty apparently centres on a sovereignty issue: some politicians are worried it would bypass the US constitution. But others on the right eerily echo the views of those high-powered Iranian ladies:

“It is like the old colonialism. That has certainly been discredited in history, but here you have the UN taking up the same kinds of principles and saying to countries you have to do things my way. You have to do things in the way of Western nations,” Dr Crouse said in an interview posted on Concerned Women for America’s website.

This line of argument is troubling at the best of times, but coming from the far-right of the US it’s preposterous:

Photo by jeffq, shared under a Creative Commons license