Something tells me Betty wouldn’t approve 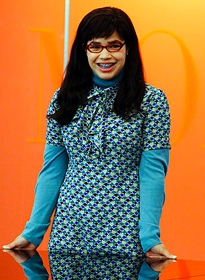 VH1 is planning to make a reality TV show based on Ugly Betty, according to TV Squad.

It is called America The Ugly, inspired by ABC’s Ugly Betty, and will attempt to find out what happens when real unattractive, unstylish women try to make it in the fashion and modeling world. As if that experience alone wouldn’t be soul-crushing enough, VH1 has thrown in a real-life Wilhelmina, The Agency’s Becky Southwick, to guarantee maximum bitchiness.

Way to transform one of the rare programmes that challenges conventional beauty standards, features interesting and well-rounded female characters and is generally brilliant, into television torture that exploits women!

Of course, I don’t want to judge the new show without seeing it, but it will take some doing to avoid pitfalls such as: choosing the contestants – based on their “ugliness” we can only presume, putting the contestants in an environment designed to be, as TV Squad puts it, soul-crushing, then stirring it all up with the usual dollop of TV misogyny. Check out Jennifer Pozner’s post at WIMN for more on sexism in reality TV.

(cross posted in an extended version at WIMN’s Voices)