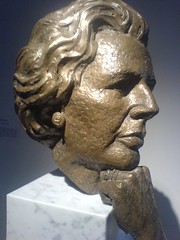 Not that I’m one to praise Thatcher, well, pretty much ever. But I guess this goes to show that even the Iron Lady isn’t immune to being reduced to a sexual object by a former colleague:

The Italian media mogul has never shied away from the language of the public bar, but his choice of words to praise the former British prime minister was startling even by his standards. President François Mitterrand famously remarked of Baroness Thatcher that she had “the eyes of Caligula and the mouth of Marilyn Monroe”. Evidently Mr Berlusconi’s attention was focused elsewhere.

Gnocca, pronounced “nyokka”, is a vulgar term meaning “vulva” and is the standard word used by construction workers, white-van drivers and long-serving Italian prime ministers for any attractive woman who crosses their path.

Unfortunately, The Independent did not manage to magic up a quote from Thatcher – or, indeed, any Tory party member.

Photo by new folder, shared under a Creative Commons license