The problem with Beowulf 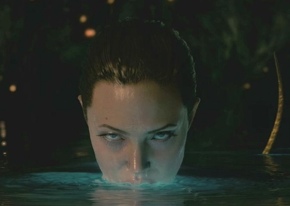 Ordinarily, I would be quite pleased to hear about a new film version of the Old English poem Beowulf. And it would be easy to get excited about the latest adaptation: the screenplay was co-written by Neil Gaiman, for a start.

But, the entire thing has been done in CGI. Not animated-characters CGI. The kind of CGI where you film live actors and then do stuff like add cloven-hooves, but also make them impossibly perfect. Check out the trailer here.

Then we get on to the casting. Angelina Jolie is playing Grendel’s mother. For those not familiar with the plot of Beowulf, it goes something like this: the eponymous hero sails over to Denmark, and kills the monster Grendel, who has been picking off the locals every night. This annoys Grendel’s mother, so Beowulf swims down to her cave, fights her underwater and kills her with a big sword he sees lying around in her cave. She’s a monster. In the translation I have, she is described as a huge “water-hag” with “dire fingers”.

I actually didn’t realise that Jolie was meant to be Grendel’s mum until well after I saw the trailer, when I read this on AfterEllen. And I studied the book in the original Anglo-Saxon at university, and have seen numerous adaptations, so I’m pretty good at spotting these things usually.

Isn’t it interesting, that this adaptation not only turns Winston and Angelina Jolie into super-perfect, flawless versions of themselves, but it turns a pretty straightforward evil beastie into a beautiful seductress? It’s not that the adaptation isn’t sticking to the original. After all, a poem written at least a few generations before the beginning of the 11th century has its own predictable issues when it comes to representations of women.

The 13th Warrior was a sort of Beowulf adaptation, which made substantial changes. Then you get Beowulf & Grendel, which was a realistic rendering of the story, and critique of the original, in which the “monster” Grendel is a social outcast and a giant.

But isn’t it possible to have a female character at all without making her a sexual object?