Over on The F Word’s blog, I posted a critique of some clothing by Locher’s. I will admit I didn’t do the full deconstruction and analysis I probably would have done if I had had more time. But I received two responses which interested me greatly. The first said (and I paraphrase) “most of these are OK apart from the ‘Will Fuck for Shoes’ t-shirt which implies a mercenariness about sex and the kitch pendant showing a picture of a child and saying ‘petite salope’ because the child is pre-pubescent”. The second said: “I am a feminist and I have a right to wear these items because I have reclaimed the insults as my own and so they can’t hurt anymore.” Both said “it’s subversive”.

Because you can’t read the slogans, wearing the Locher t-shirts is akin to going to work without your knickers on: a perhaps intensely personal and private subversion, but not one anyone will notice unless you tell them

To me, this type of thing can only be subversive if the context is one which challenges rather than maintains the dominant, patriarchal, hetero-normative mores. Let me start off by saying I support a woman’s right to wear whatever she wants. But supporting that right and reserving the right to critique are not mutually exclusive. That critique isn’t a personal thing: I am not criticising the women wearing the clothes, but rather the society which produces the clothes and defines how those clothes are seen in society. For me, there is a real, strong tension within feminism that we must address about how “playing” (in a post-modern sense) with ideas and theories radicalises or supports the dominant ideology. What I mean is whether it is, or can be, radical to simply represent – without adjustment – patriarchal ideas or meanings, or whether we have to do something more to manage actual reclamation or subversion.

For example, these t-shirts/slogans, for me, are subversive. They subvert by making visible what society demands is kept invisible. They make a point of identity politics by taking a stand. 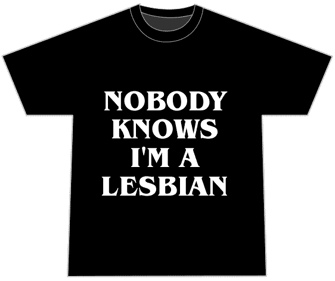 OK, what’s the difference between these t-shirts and the products I talked about on the blog? For a start, the t-shirts above announce identities usually vilified in the media. Locher t-shirts, however, don’t really “announce” anything, so much as hide amongst flowers and embroidery. On the original blog entry, I had to clearly label the slogans at the side of the pictures, to ensure people could see what I was talking about. If you want to be subversive, surely people have to be able to read, see or hear that challenge? On the Locher t-shirts you can’t, so the act of subversion becomes, if you’ll excuse the metaphor, akin to going to work without your knickers on: a perhaps intensely personal and private subversion, but not one anyone will notice unless you tell them.

Now whilst these little, hidden revolutions might be useful, they are not, to me, subversions, precisely because women are expected to keep their voices unheard, their political actions small and quiet and their opinions in the private sphere. They also can’t challenge the dominant mores, precisely because no-one can see them and visibility is important to subversiveness. Ah, but critics of my argument will say, once spotted the slogan causes greater impact because of the juxtaposition. However I doubt that anyone will notice what is embroidered on these items without having their attention drawn to it. 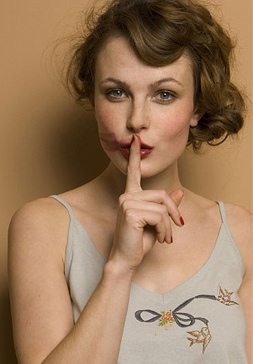 Secondly, for me, these are not subversive because they do not challenge patriarchal and hetero-normative values. Instead they replicate them. This is particularly obvious in the adverts for the t-shirts, which reproduced, rather than subverted, the usual advertising images with their subtext of pornographic representation. Let’s take this photo (left), which shows the model with what we assume is chocolate smeared round her mouth. The smear is unclear and difficult to identify, so could just as easily be faeces from what we can see. The implication either way is a very traditional pornographic one – the woman with the “dirty mouth” willing to be a “messy eater” and, possibly, to engage in croprophilic acts. The slogan on the t-shirt reads “Sorry darling, good girls don’t swallow” at the same time as the visual representation suggests not only that the model does, but that, in fact, she may swallow faeces. (I don’t want to get too carried away here, but it is a legitimate reading). Other photos use the cream/milk/ejaculate visual code to represent the oral willingness of the model.

In another shot, the model is show with a narrow scarf. The scarf is wound several times round her left wrist and then passes around her neck and down to her right wrist where the scarf is also wound around several times. The scarf, therefore, is not a scarf, but a fabric manacle wrapped in a strangulation position around the model’s neck. The t-shirt slogan is “I don’t play nice”. Subversive (if it were writ large), almost certainly, but then undermined by the sado-masochistic presentation of the model. Had the model been holding the scarf outwards towards the (unseen) viewer without it being wrapped round her wrists I’d be more inclined to see sexual action and subversion. Here, however, the woman is submissive and therefore implying not only does she play nice but she might even “play” dead if you pull on her wrists. So the message of subversion (hidden amongst the pastel colours, flowers and, curiously, written bottom to top along the hemline of the right breast) is undermined by a very pornographic portrayal of the model. And the visual imagery shares a lot with the Dolce and Gabbana “gang rape” adverts recently criticised in Europe.

Which neatly moves me onto to a final point of why these t-shirts don’t, for me, represent subversion – because they support patriarchal and hetero-sexist norms. Where is the acceptance that the women buying a pastel t-shirt may not be heterosexual? Where is the loud emblazoning of women’s right to non-patriarchally defined female sexuality? Where, in fact, is the subversion at all? Ever since the reworking of the Ford logo to read “Fuct” (or various other forms of the same sentiment) “rude” words on t-shirts have been used in what is meant to be a subversive way. French Connection’s (or FCUK’s) ubiquitous attempt to get us to think they were called “Fuck” rather proves the point – while this sort of lazy activity might arouse a giggle from a teenager, it isn’t really subversive. So, for me, a slogan reading “No Time to Fuck” is about as subversive as Terry Wogan on Eurovision.

If these t-shirts are so very empowering and subversive, why is the biggest size available a 14?

Subversion is, of course, all about context and I am sure some people create a subversive look using these items of clothing. The second commenter on my piece said that she was wearing the “Petite Salope” pendant as she was writing, and she saw it as a reclaimed term, devoid of any power. But continuing power is precisely why terms have been reclaimed and so, for me, the logic doesn’t work. Either the term has power and so we reclaim it, or it doesn’t have power. And if reclamation depoliticises these terms, then surely we’ve missed the point and we are accepting that the feminisation of language (through reclamation) comes with a drop in prestige/explicitness which accompanies the feminisation of all things.

So, to return to the reader-responses my blog post provoked. For me, these t-shirts are not subversive, because they replicate patriarchy, exploitation and do not speak out loud the points they are making. Subversion does not come from repeating what is wrong and this “reclamation” isn’t empowerment. That said, I absolutely reserve the right for feminists to contextually subvert the patriarchal meanings of these t-shirt slogans in their own way. My critique is none the weaker for someone’s ability to do that. Women’s sexuality isn’t being empowered by these shirts precisely because they are afraid to “speak out” and because any radicalism in the slogans is then undermined by their visual representation in the advertising.

And if these t-shirts are so very empowering and subversive, why is it the biggest available size, on average, 35.75″ (bust measurement) which comes in at just less than a size 14 (UK). Can only thin women be (non)subversive?

Both the commentators were asked to contribute to this piece and neither responded. Anyone wanting to enter into a dialogue on these issues please feel free to contact the author via The F Word.