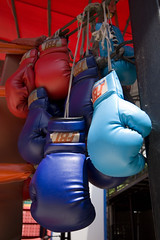 A group of women in Afghanistan are taking boxing lessons in the football stadium where the Taleban once carried out public executions, reports the BBC.

A new generation is challenging the usual stereotype of Afghan women as shadowy figures concealed from head to foot behind powder-blue burqas.

And the training is tough.

Occasionally the trainers, who run the national male boxing team as well, sprinkle water onto the floor to damp down the dust flying into the air as the women pace round, then warm up on punch-bags before squaring up in pairs against each other for training bouts.

All of the women participating are in their late teens. The training is put on by an NGO called Co-operation for Peace and Unity: in between bouts, the women discuss “non-violent approaches to conflict resolution”.

I have to say – good on them. The folks organising the sessions explicitly state that the boxing is meant to help these women gain confidence in a male-dominated society. What better way, than proving boxing is not the sole preserve of men. Apart from some misgivings about head injuries, it seems like a good idea – although, perhaps, it is a bit of a weird way to promote peace. (I guess it works on The Wire.)

As Broadsheet say, it’s a “bit of a bizarre scene”. And maybe NGOs should be talking to the men about quitting that violence stuff.

Photo by Jared Kelly, shared under a Creative Commons license