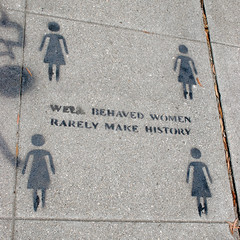 The term herstory is used by feminists to call attention to the long-term failure of historians to record and explore women’s experiences and deeds.

Of course, the term has come under attack plenty of times from the ‘political-correctness-gone-mad’ crew, mostly because it messes with their precious language. It’s actually quite easy to dismiss this (language mutates all the time, so generally speaking when people make this argument and don’t object to, say, the invention of the word ‘internet’ or ‘computer’, it sets off big sexism warning bells in my cranium).

But Pauline Park over at Big Queer Blog has a valid objection: the term is impossible to translate into many other languages, culturally seperating anglophone historians from their peers in other countries:

‘Herstory’ is an anglophone invention that is as ahistorical as it is unfortunate and use of the neologism divorces the study of history in the English-speaking world from the Italic and other Indo-European languages and cultures that use a word derived from the Greek ‘istoria’ without in any way connecting the study of history to non-European languages and cultures.

‘Herstory’ also has the unfortunate effect of erasing the ‘story’ from ‘history,’ which is the true etymological connection. History is in fact the story of both men and women – not to mention the transgendered, the intersexed, and those who may not have identified as either men or women – from the beginning of, well, history. Human history is about those stories, and the women who thought they were advancing a feminist agenda by attempting to popularize the term ‘herstory’ only showed how white-privileged, anglocentric and temporally limited in consciousness they were in their approach to human history.

I think she probably has a point here.

But, on the other hand, the same arguments could be used to shoot down Ms – a completely made-up title which is impossible to translate into other languages. Of course, the title Ms isn’t used retrospectively to describe cultures, politics and other happenings across thousands of years. And the same rules do not apply in other languages to the same extent that they do in English. But still.

Photo by otherthings, shared under a Creative Commons license