Against women-only refuges from groping 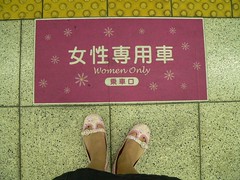 Jessica Valenti from Feministing.com has a very well-argued piece in today’s Guardian, arguing that women-only train carriages and other efforts to segregate women in order to protect them from harassment are fundamentally flawed.

As well as pinning down the way that these spaces re-inforce stereotypes because they tend to be wrapped in a big pink ribbon of feminity, she raises some great points about the long-term dangers of sex segregation:

In cities that offer women-only train carriages, what happens if a woman is groped – or worse – in a carriage that isn’t women-only? Will she be blamed for not taking advantage of the “safe” space provided? After all, women are all too used to being blamed when it comes to assault, questioned as to why they were out on their own/wearing a short skirt/drinking.

She argues that although these ‘safe spaces’ can provide a temporary respite from gropy men, they are a sop – and give society an excuse to avoid the more difficult task of changing the way these men behave.

Photo by Crys, shared under a Creative Commons license