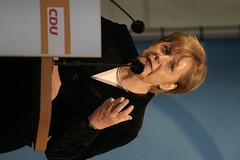 Angela Merkel, chancellor of Germany, is the most powerful woman in the world, according to Forbes magazine.

But British women did poorly in the ranking – the Queen, who is more mascot than power broker, let’s face it – came in top at 23rd. The next Brit was Clara Furse, who runs the London Stock Exchange, at 54th.

One reason for this was that Margaret Beckett has left the list completely, after being demoted by Gordon Brown from her role as the UK’s Foreign Secretary.

Does any of this make a difference? Well, perhaps not, but doesn’t it say something that the most powerful British woman doesn’t actually have any power?

Also check out this slideshow of up-and-coming women who didn’t make this list, but who Forbes expects to do big things.

Photo by cgommel, shared under a Creative Commons license