Discrimination hits corporations in their wallets; surgically replace your eyelashes! 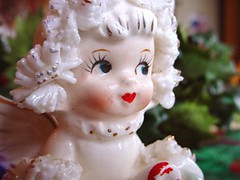 US firms lose out on $64 billion, or about £32 million, a year from professionals who quit their job when they are discriminated against on the grounds of gender, race and sexuality, reports the Financial Times.

The research by the Level Playing Field Institute, found that:

Compared with heterosexual white men, who account for the majority of US managers, non-white people were three times more likely to claim they had left after being unfairly treated, while homosexuals were twice as likely.

Meanwhile, CBS News reports that the latest fad is $6,000, two-hour surgery to replace your eyelashes with hair from the back of your head. After this operation is complete, you can expect to have to trim your eyelashes for the rest of your life.

Over the past two years, says Dr. Alan Bauman (www.eyelash-transplant.com), he’s witnessed an explosion in the number of patients opting for eyelash transplants for cosmetic reasons.

“When we first started offering these procedures to our patients back maybe seven or eight years ago,” Bauman recalls, “it was mostly trauma patients who wanted eyelash transplantation. … But today, things have kind of switched around.”

One of the women who has undergone the procedure tells CBS that she used to put on false eyelashes every day, or sometimes more often. Another women still uses mascara every day, even after stitching extra hair to her eyelids.

The beauty-standards-industrial-complex gets weirder and more demanding of women every day.

Before tutting too much over the antics of those across the pond, consider this report from the Guardian showing that UK women are more likely than US women to have cosmetic surgery to please a partner.

“One British 39-year-old barmaid told me that her husband’s criticism of her figure prompted her to have abdomniplasty [a ‘tummy tuck’]. She said it wouldn’t have entered her mind otherwise, but after she’d had her second child her husband said: ‘I love the wee ones but I wish having them hadn’t ruined your figure’.”

Photo by Tinker*Tailor, shared under a Creative Commons license