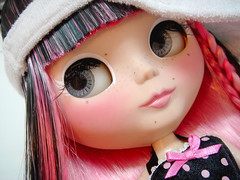 There are so many little subtle (and not so subtle) ways in which boys and girls learn what it means in our society to be male or female. Being female is generally represented as being attractive, being male is mostly represented as being active. I was thinking of this again when I caught an episode of CBBC’s “Beat the Boss” yesterday, a children’s TV programme in which kids (‘The Bright Sparks’) take on adults (‘The Big Shots’) to develop the better product – kind of like The Apprentice for kids (in fact it’s presented by an ex-Apprentice contestant).

In this episode, the brief was to develop a breakfast cereal aimed at children. The kid’s team developed a concept around a crunchy biscuit, branded with cartoon characters called “The Crunch Crew” (click here for a picture). These consisted of Crazy Crunch, a wild haired grimacing dude sticking his tongue out, Clever Crunch, a bespectacled nerdy looking dude with a book, and Cute Crunch; the girl character, who is holding a handbag. Sigh.

Y’know, I’m aware it’s children coming up with these ideas, but I was disappointed that no-one in the programme seemed to question this at all, at least suggesting an additional female character with more attributes than “Cuteness”.

An earlier episode of the programme illustrated another example of product marketing reinforcing the message that girls’ only activity is being cute.

The brief was to develop a hair gel that would be attractive to children, both boys and girls. The adults team came up with ExtremeG, which had pink and blue sides. The blue side shows a skateboarding boy with “For Wild Boys” as the strapline, and is called Extreme Grip. The pink side is “For Hot Chicks”, showing a girl (who is, well – crouching? Posing? I can’t tell. It’s possible she’s holding a surfboard, but she’s certainly not flying though the air like the boy is.) The girls’ side is called Extreme Glam.

I’m not saying this programme is particularly bad, it’s not – it’s just another example of how all the small drops in the Ocean influence childrens’ concept of male v. female. Kinda makes me hanker after the days of the Spice Girls – at least we had Sporty back then. But I believe noticing these things and pointing them out can only help.

I’d recommend this brilliant book, There’s a Good Girl: Gender Stereotyping in the First Three Years – A Diary by Marianne Grabrucker, for more observations like this. A bit out of date now as it was written in 1988 but it’s a real eye-opener and still totally relevant to parenting today.

Photo by s.o.f.t, shared under a Creative Commons license