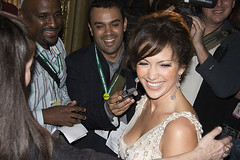 Today’s issue of The Metro, a free tabloid newspaper owned by the Daily Mail Media Group, distributed every weekday on the London Underground, advises us that women can now breathe a sigh of relief because JLo has cellulite.

The version of this piece on page seven of the paper itself is even worse. A close-up of JLo’s arse, sporting hardly any cellulite whatsoever, illustrates the following:

It is seen as a perfect example of its kind and is one of the most talked-about body parts in the world. However, the bottom belonging to Jennifer Lopez finally seems to have a chink in it. Pictured on a beach in Puerto Rico, the posterior of the 38-year-old star appeared to show signs of the dreaded cellulite. At last, women the world over can breathe a sigh of relief.

This is so hideous on so many levels I’m not even sure where to begin. For starters, I think she looks fantastic. Pictures of her “cellulite-ridden” behind are online accompanying the slightly less objectionable report in the Daily Mail and I defy anyone to find it unattractive. If I were 18, let alone 38, I’d be happy to have a backside like that.

Then there’s the wording of the article, disembodying Lopez’s arse by regarding it as an entity in its own right. But what really raised my hackles was that comment at the end – women can now breathe a sigh of relief.

According to the Metro, women spend their lives in a state of perpetual anxiety because celebrities’ arses are less dimpled than theirs. Only when they come to the rescue by printing a photo of a less-than-peachy celebrity rump can women cast off their sarongs and allow themselves to relax.

Photo by Reza Vaziri, shared under a Creative Commons license