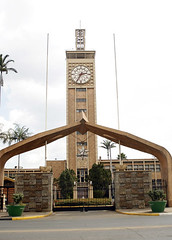 Kenyan campaigners have failed in a bid to secure 50 seats in parliament for female politicians, reports the Feminist Majority Foundation.

Out of 222 seats, women fill only 18. According to media reports, a bill to increase the representation of women in parliament was thrown out, after “more than half” the representatives left the building. Perhaps not a complete surprise, as 32 would have to lose their seats if it had passed!

Among those unimpressed by this sterling show of fairminded-ness was the UN:

“The status of women in Kenya is not acceptable,” said Elizabeth Lwanga, the UN coordinator in Kenya, according to Inter Press Service (IPS). “The number of women in parliament should not continue to be at a small percentage when other neighboring countries have taken steps to rectify the situation.” In neighboring Tanzania, women fill 30.4 percent of parliamentary seats; Rwanda has achieved a 48.8 percent representation in the lower house.

Photo (of Kenyan parliament building) by DEMOSH, shared under a Creative Commons license