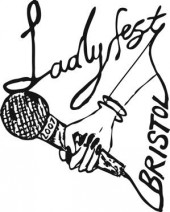 Ladyfest Bristol had a great launch at The Cube on Monday night. I must confess this has been my first time attending a Ladyfest, as I tend to get rather embarrassed when I am reminded that a celebration of women’s achievements is still necessary. It probably seems like an odd thing for a card-carrying feminist to admit but, sometimes, the drawing of attention to women’s persistent status as “other” makes me suddenly want to become one of those people who strategically pretend that we have now achieved equality in an attempt to make it somehow true.

Luckily, I needn’t have been troubled by backlash-esque visions of a po-faced and depressing night, as the evening turned out very well; showing a much-needed and spirited commitment to the DIY ethic, alongside the artistic talent necessary to aid credibility in the face of an often hostile cultural mainstream.

First of all, we found our way to the bar while DJ Black Rainbow played two-step, Asian underground and global beats. (Sadly, I was still in sketchy I-should be-writing-in-my-notebook mode while she was on and, ironically, this meant I didn’t catch a glance to see if she was wearing the out-of-character ladygear she had hinted at on her MySpace blog!) There was also work on display from artists Lady Lucy and Susie Hogarth. Lady’s page-based textual piece was a work in progress, focussed on excerpts from a collective Feminist Review article about feminism in the 1950’s by the Birmingham Feminist History group. For me, the references in the text to the exclusively reproductive slant to sex education (with sex for pleasure’s sake kept hidden) served as an interesting reminder of not only what a huge job feminists had on their hands at the time but also of the hangover from such thinking that still persists. (One example of this would be in the pathetic lack of challenge from our schools to the idea of virginity as a commodity that can be lost, stolen or given up through one highly specific sex act.) Susie’s Hidden Triptych piece was made up of three delicate drawings against a minimal backdrop, exploring images of childhood and identity. Here’s what Susie says about the pieces:

I’ve been focussing on hands in my drawings recently and was loosely inspired by the very deliberate and slightly awkward expressive poses adopted by figures in anglo-saxon tapestries. I like the uneasy collaboration of physical inelegance with an attempt at sophisticated communication… The children in the ‘triptych’ are attempting to express something ‘other’ but we don’t know what it is, hence the ‘hidden’ bit. I always draw women and children because they are so often objectified (intentionally or not) in the visual arts as cute or beautiful or ugly or innocent (or not) and I like to reinterpret them as challenging characters, engaging somehow with the viewer and attempting to communicate something that may not be tangible or easily-defined.

Meanwhile, there was an interactive installation in the women’s toilets entitled What do You See When You Look in the Mirror? The work came from the Centre for Appearance Research at UWE and invited visitors to write down their answers on cards and hang them up alongside the others to be posted up on the Ladyfest site later. The installation was juxtaposed with Albert Krudo’s Evolution of Ken, a page-based piece showing the three steps in which Barbie’s plastic lover has morphed into a musclebound beefcake (from 50’s/60’s to 70’s/80’s to 90’s/00’s). This piece served as a reminder of how our culture has tightened up on the pressure on men to conform rather than let up on the beauty ideals foisted upon women; the usual rigidly opposing stereotypes being exaggerated yet further in order to move towards oppression for all rather than freedom. Along with this, I found an Eve Ahmed article about employers who unashamedly look to recruit people who are “good looking” on the inside of the door to one of the toilets. Overall, the toilet art was great but maybe next time we could see some infiltration of the male space at the event (i.e art in the men’s bogs too)?

Next up, was a screening of Don’t do Tricks, Lady Lucy’s film about a day in the life of one artist (herself) and her skateboard, as she goes about her business round Bristol, defiantly refusing to conform to the rituals that are expected of her in order to prove her credibility and, instead, methodically continuing with her journey. There were plenty of sightseeing pleasures for the Bristolian viewer, including some great shots of Picton Street, Stokes Croft and, best of all, a visit from Lady Lucy to good old Café Casa* for a cup of tea and a muse over her sketch book. There was also a tantalising mention of a mysterious “super-rare 10″ record” called I Ride My Skateboard, Yeah (and, yeah, I did make a mental note to look it up in an attempt to add it to my own nerdstore of music knowledge!)

Don’t do Tricks was followed by a talk from Charlotte of Bristol Fawcett, touching on issues such as the pay gap, pensions, job loss because of pregnancy, the lack of a rape crisis centre in Bristol and the forthcoming collation of work from our Day of Action in July. We then watched a performance from Gap Tooth, whose style moved between the energy and wit of Le Tigre and a more downtempo vibe, with political lyrics and delivery that reminded me a little of Billy Bragg. There were also clever references to prompt a weary smile from any existentialist-feminist who has ever agonised over the pour-soi/en-soi conundrum (“I could be De Beauvoir to your Sartre”) and plenty of progressive questioning of the cult of the breadwinner that continues to oppress both sexes. Ladykillers undoubtedly stood out for me as the potential chart hit. However, bearing in mind today’s limited cultural climate, I guess it would need to be remixed by Soulwax and featured on a TV show about teenagers who like to shag, take drugs and do transgressive things like frolic about at parties in bearsuits, while covered in foam before mainstream success could finally be achieved. Oh well. Never mind all that mainstream bollocks anyway because, to top it all off, Gaptooth got a pair of men’s pants thrown at her at the end of her performance. I’m not sure how spontaneous this gesture was but I know I definitely approved. Maybe a few subversive twists to the banal symbols of the mainstream would be a good thing after all.

There was also an excellent performance from Anat Ben-David (of Chicks on Speed fame) with the original “Dyke Rider” on drums for Virtual Leisure. Alongside the backdrop of Anat’s video work, the lyrics provided yet more to think about. Anat’s mocking pisstake of the amenable, nodding party-girl in We’re Having Some Good Time made me straighten my face, defensively slouch back in my seat, part my legs and drape my arm round my boyfriend. Also, while her sharp and comical delivery of the line “things I can’t give you are useful. Things that I can… aren’t” did seem to resonate very strongly, I also found myself asking whether it is actually society’s anxious awareness of female “usefulness” (i.e we’re the ones who can get pregnant) that is the real problem. Then again, I suppose that’s the very thing that contributes to the dismissive downgrading of the things considered “women’s work.” Overall, I enjoyed the performance. It just brought back memories of the many hours I spent at college trying to decipher highly sophisticated performance art and wondering if I “got it” (thus meaning that by default, I probably didn’t).

That’s enough from me for now. I’ll leave it up to you readers to have a look at the programme and come and check out what’s in store for the rest of the week. The festival is now on it’s third day and tonight you’ll have Cherry Fest and the Ladyfest Folk Tales Special to choose from. I’m going to have a look at the artwork at Cafe Kino and the Here shop and Gallery as soon as I can and am also hoping to make it to Girl Wonder on Friday and the singing workshop on Saturday. Maybe I’ll see you there!

* = In my opinion, Cafe Casa happen to make the best cappuccino in Bristol*.