Long-live the assertiveness of WAGs? 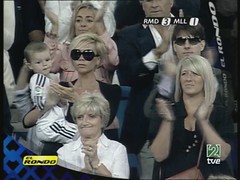 I nearly laughed out loud on reading today’s ‘news’ that some people hold in contempt footballers who ‘allow’ their wives and girlfriends to influence their life choices.

According to the BBC, Roy Keane (Sunderland boss), believes that footballers who make decisions about whether to make a particular career move based on their wives’ or girlfriends’ desires are ‘weak and soft’. He says:

If people want to go somewhere else to another football club then fair enough, as long as it is for a footballing reason.

But there are players going to clubs in London simply because it is London. To me, that is wrong.

It is not a football move, it is a lifestyle move and those are the type of people you don’t want at your club.

Keane appears to be genuinely surprised and frustrated that footballers’ partners are any part of the family-decision-making equation:

We have had one or two players this year and their wives are clearly part of the package.

Keane attempts to win us over by focusing on the idea that the women are actually only driven by their need for some good shopping – which is of course frivolous and ridiculous and should not be pandered to. And more, he suggests that it is entirely up to the women to adjust to whatever new environment they find themselves in as a result of their husbands’ careers. Should they be unable, there is quite possibly something wrong with them:

If there is nothing to do then find something to do. Someone once told me that people who are bored are boring.

People who get bored coming to the north-east are bored because they are boring. It is nothing to do with the shops.

Certainly footballers’ partners may have less to worry about in the way of money, power and other forms of privilege, and some of them may indeed ‘behave badly’ in the eyes of many. But the contemptuous caricaturing of WAGs as objects of folly actually says a lot about our ideas about how the ‘supportive wife’ should act.

So to make the point, the media seeks out these wives and girlfriends in those exact situations where they are – foolishly, embarrassingly – playing an idle, trophy wife character. The term ‘WAG’ stems from a largely tabloid idea about footballers’ partners having not much else to do besides shop and socialize, as Sarah Louisa Phythian-Adams has discussed on these pages.

In this case, why wouldn’t, Keane wonders, a wife or girlfriend happily follow their footballer to the ends of the earth if that is where the best grass is for him to run on?

Photo by Piutus, shared under a Creative Commons license