Matt Damon calls James Bond out as a misogynist 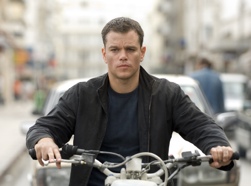 At the premier of the latest Bourne flick, actor Matt Damon called James Bond an “imperialist and misogynist”, reports the Daily Mail.

“The Bond thing, I understand the comparison because they are both agents and it’s the world of espionage and all, but the characters are so fundamentally different they almost don’t bear comparison.

“Bond is an imperialist and a misogynist who kills people and laughs about it, and drinks Martinis and cracks jokes.

“Bourne is a serial monogamist whose girlfriend is dead and he does nothing but think about her.

“He doesn’t have the support of gadgets, and he feels guilty for what he’s done.”

I know it shouldn’t be that surprising to see a Hollywood star point out an example of sexism in the media, but it is, so thank you Matt Damon!