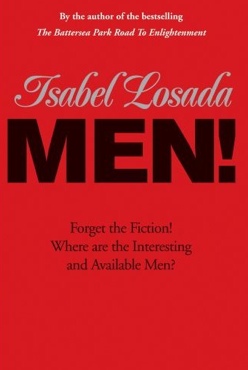 Isabel Losada has written non fiction books on the inner lives of nuns, finding enlightenment and saving the world. Her latest release is a little more down-to-earth: “Men!” she exclaims. “Where the **** are they?”

She believes there is a national shortage of interesting, available men over the age of 35. For the purposes of the book, her definition of an interesting man is: “One who when you meet them you’d like to have dinner with them and, having had dinner with them you are glad that you had dinner with them and would like to see them again.” Available means emotionally available as well as single (and married men who tell women they’re separated don’t count!) The interesting, available man should also have travelled, be independent and free from addictions and other emotional problems. Is such a man so elusive? The evidence of her own love life and those of her friends suggests he is, so Losada embarks on a nine-month quest to find out where all the interesting and available men are, and to net one for herself in the process.

As a book reviewer-slash-single woman, I seem to have read reams of books (both fiction and non-) in which a woman looks for her perfect man via internet dating (or some other gimmick) uses Jane Austen’s novels as a template for love or needs a gay man to tell her how to dress for a date. Although sometimes entertaining, this type of book is often enough to make a feminist’s hackles hit the ceiling. But refreshingly for readers tired of how-to-find-a-partner clichés, Losada makes clear in her introduction that: “This is not about looking for a man to make us happy – I know that no such man exists. I know that happiness is inside me and that I’m the source of it.”

To find out where all the eligible men are hiding, Losada visits some all-male environments on our behalf. She attends a Harley Davidson ‘ride out’ and a weekend plumbing course before spending two weeks working as the only woman on a building site. Dispiritingly, she finds that men are often quite literally hiding from women as they prefer to spend leisure time in the company of other men. The motorbike club is mostly a chance for men to drink copiously and tell sexist and homophobic jokes. The plumbing course is not set up for women although Losada copes admirably well and the building site workers treat her as one of them (after some initiation rituals), but their views on life and love are enlightening in all the wrong ways.

Men! buys wholesale into the social stigma of singledom

An advocate of the saying “if you do what you’ve always done, you’ll get what you’ve always got”, Losada vows to try more new things. She attends lectures all over London, learns to drive a motorbike (until an accident stops her short) and goes on a diving holiday in Egypt. She also falls for two men, both of whom contravene her definition of ‘available’ in different ways. She is endearingly open and frank about her romantic missteps, admitting that getting over one of these men is so hard that she wouldn’t be interested in a new relationship anyway – so her experiment is flawed on a personal level. I can’t help but wonder to what extent this colours the conclusions she draws.

At the end of the quest, Losada confirms her hypothesis: as she suspected, there is a lack of interesting, available men for independent, intelligent women over 35. Losada claims she was hoping to be proved wrong but the words ‘self-fulfilling prophecy’ don’t seem out of place here – throughout the book it is more than apparent that she wants to prove herself right. Losada presents her findings as conclusive evidence, saying “it’s a genuine sociological phenomenon”. But surely there is room for the possibility that someone else could attempt the same investigation in a different way and have a different outcome? For a start, although she experiments briefly with internet dating, Losada refuses to go to nightclubs, join a dating agency or attend singles’ events.

If more people were honest when a relationship stops working, this would let loose more men

However she does have suggestions for changing the situation she says she has uncovered. First, women seeking men should take a new approach: “Doing radical and exciting things with our lives is one solution”. Surely that’s never a bad idea. Losada also encourages us to look at the bigger picture, postulating that the reason so many marriages are unhappy is that people lack the courage to be honest with each other and to leave without fear of recrimination when a relationship is no longer working. If more people were honest when a relationship stops working, this would mean more available men let loose.

More controversially, she declares that more divorce would be a good thing: “But a totally new kind of divorce; one without acrimony, pain or lies.” Which certainly sounds like a nice ideal and one that’s certain to be less damaging to any children involved. But what about the childcare? Losada has some answers but coming from the perspective of a one-parent family she can’t possibly understand all of the issues involved for a larger, fractured family. Perhaps it would be better to encourage people to be more cautious and have more insight when picking who to mate with in the first place?

Still, I welcome what Losada calls ‘spiritual feminism’, blending the teachings of Buddhism (non-attachment and compassion) with feminist principles (independence, integrity, respect for our sisters). She’s right that we cannot be happy in a situation where we’re desperate for our partner to stay with us whether he wants to or not. She wisely says: “There is so much pain that we exacerbate with our expectation that [men] should play a part in our wholeness. They will not. They cannot.”

The author claims she’s not scared to be a single woman forever if she can’t find Mr Right. But her vision of aging single women, though (I hope) tongue in cheek, is offensively and lazily stereotypical: “I have so many wonderful female friends… we could all move into a house together that would become a glorious celebration of being old batty females. We’d all have to wear purple. And have lots of cats… pretend to be witches and have big bonfires and make strange sounds to frighten the local schoolchildren.” If that’s what happens to single women of a certain age, it’s no wonder Losada wants a man.

During her research mission, Losada goes on her first dive and absolutely loves it. She comments that it’s a shame she’s on her own. Is an experience only worth having if you’re with someone else?

At times I couldn’t help entertaining the un-sisterly thought that perhaps her standards are too high. If a man has different views to her, she’s not interested. If he enjoys spectator sports, she’s not interested. And yet she falls for two unavailable men in the space of nine months. Wouldn’t a football fan have been better? Also, although she talks repeatedly about not needing a man, she frequently presents being alone as the third-rate option. During her research mission, Losada goes on her first dive and absolutely loves it. She comments that it’s a shame she’s on her own as it would be ideal to share the experience with a partner or friend. Is an experience only worth having if you’re with someone else?

Although intelligently-written and well-considered, with a spiritual angle not often found in books about love, Men! isn’t as new and subversive as it wants to be. It is after all another book about how women can find men (isn’t it time they found us for a change?) It’s another book which takes for granted that women can only be truly happy with a partner – and a heterosexual one at that. There’s no discussion of homosexuality anywhere in the book: at the least, I expected a “sorry gay women, this isn’t for you”-type disclaimer in the introduction! And there’s no understanding or recognition of the fact that a woman may sometimes be happiest without a romantic relationship. Although open-minded in some ways, Men! buys wholesale into the social stigma of singledom. While part of me found it sad that a vibrant, intelligent and (not that it should matter, but it probably does) attractive woman like Losada finds it so hard to find a lasting relationship, a larger part of me thought: “So?”

I found the author charming and frank, and the book has more depth than others of its ilk. It may even contain some useful advice for the looking-for-love among us. But where Men! falls down is in assuming that all women want the same thing, namely “the companionship of men”. If you don’t want that, you’re not catered for here. You’re not even considered.